While we’ve seen a couple of high-profile flagship smartphones in the first quarter of 2019, there are many other OEMs yet to reveal their high-end devices this year. Asus is one of them and it has confirmed the launch of the ZenFone 6 in May. The handset has previously appeared on certification portals such as NCC with model number ASUS_101WD. The same model has also appeared on Wi-Fi Alliance today hinting that Asus is working behind the scenes for a launch in the US. 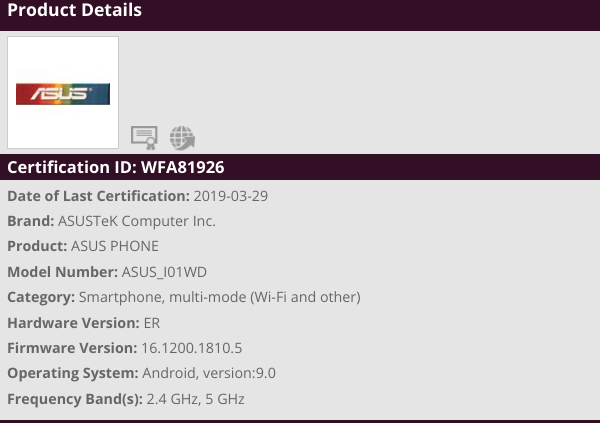 As usual, the Wi-Fi certification reveals the Android version which is 9.0 Pie and that the handset will also have dual-band Wi-Fi capability. That’s all we can muster from the listings right now.

As far as previous leaks and promo material is concerned, the ZenFone 6 is an interesting proposition as it could either choose a sliding or pop-up route with the selfie camera, leaks have indicated. The design is not yet confirmed but a triple rear camera setup is likely. Being a flagship phone, we expect top-tier specifications like Snapdragon 855 SoC, 6GB of RAM, and other high-end peripheral on the premium smartphone. But like the previous ZenFone 5Z,  perhaps the most alluring thing about the ZenFone 6 will be its price and we can’t wait to see it. The launch of the ZenFone 6 is on May 14.

Next Razer Phone 3 will arrive late due to 5G