After the release of the Redmi Note 7 Pro and Redmi 7, Redmi has been quiet lately, but now the sub-brand has announced a new partnership with Marvel in the promotion of the upcoming fourth installment of the Avenger’s series, Endgame. The company made the announcement via Weibo, right before it was picked up by media and does offer some hints about this partnership.

In addition to a shared image of the film’s official poster, the company indicates that the superhero group’s number has been ringing more directly states that it is Marvel’s exclusive ‘mobile partner’ for the movie, so we won’t have any Avenger’s OnePlus or Galaxy this time around. The implication directly seems to offer that Redmi – recently split from Xiaomi – will be releasing a special edition smartphone in support of the movie. 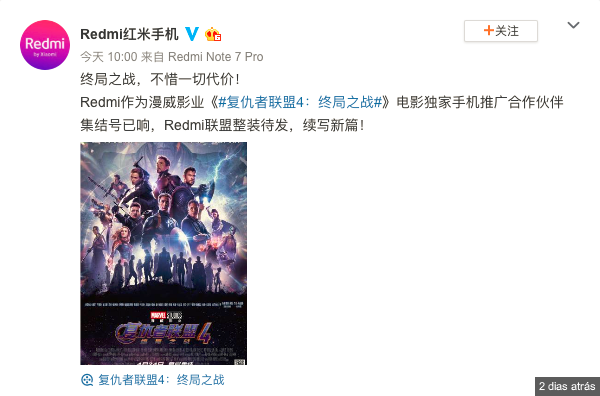 If we give a look in the current Redmi’s portfolio, the most powerful smartphone of the company at the moment is the Redmi Note 7 Pro, and of course, would be the perfect choice for Redmi to carry the Avenger’s special edition branding. In the past year, OnePlus has built a similar partnership with Marvel, which resulted in the launch of a OnePlus 6 with a ‘custom 3D aramid fiber-textured glass body, with Gorilla Glass 5 coating’ that featured a golden Avenger’s emblem. In terms of specifications, the device was very similar to the top-tier variant of the OnePlus 6. The cost was set at $875 in China and the device got available in India as well.

A similar expectation can be justified for the Redmi Avengers device if that’s what the two companies have planned, but it may be reasonable to expect Marvel to go even more over the top this time around. Considering all Redmi devices, it’s natural to expect that both companies would choose the Snapdragon 675 powered, Sony’s 48MP camera device – The Redmi Note 7 Pro, which was currently unveiled in China and India. Xiaomi’s executive has recently denied any plans for a Global variant of this smartphone, but we wouldn’t be surprised if a Global Avenger’s branded Redmi Note 7 Pro reaches the Global scene.

Still, there are many rumors about a Snapdragon 855 powered Redmi smartphone, hinted by the company back in February. After all the expectations, the rumors were kinda denied, but they simply can’t die. If that’s the case, the Avenger’s Redmi smartphone could be centered around this mysterious device that would come with modern standards, such a top-tier chipset, 6GB of RAM, Android 9 Pie with MIUI 10, and with Redmi’s usual 4,000mAh battery, and why not the same 48MP camera used in the Note 7 series?

Currently, there is no information regarding when the results of this partnership will reach the market, but that should follow up the same agenda adopted by OnePlus last year when the special edition smartphone came a month after the film was launched in theaters. If Redmi follows a similar pattern, more information will pop-out in the upcoming month, since Avenger’s Endgame debut is scheduled for April 26, if a new smartphone is coming to honor this partnership, we may see news about pretty soon.

Previous Google Assistant support may come for Chrome for Android

Next Redmi 7 set to launch in the Philippines

Redmi Note 12 is on the way: The first teaser published