So far this year, a total of 15 HTC apps have disappeared from the Play Store including the Sense Home launcher and the apps from Contacts, Calendar, Mail, Dot View and others.

Other apps that have not yet been removed take months without being updated, so they do not seem to have much future. The strange thing is that HTC has removed apps like Mail or Contacts, which are important apps that come pre-installed on the brand’s smartphones. 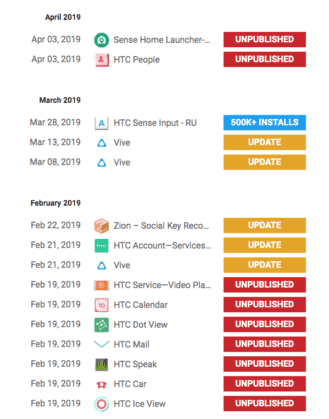 It is not clear what is happening but there are several possible explanations. The smartphone business of HTC is not having great success, so keeping apps that do not have many users is a cost that the company can not afford anymore.

Another possibility would be that HTC plans to launch its new 2019 smartphones with Android One, which would eliminate the need for these apps. At the moment, the company has not given any explanation. However, there are still plenty more apps from the Taiwanese company still live on the Play Store.