The Chinese phone maker VIVO is no doubt one of the few OEMs known for their innovativeness within the smartphones market. It was one of the pioneers of the in-display fingerprint reader, the notch-less all-screen design, the pop-up front camera, and earlier in March, the brand decided to have a share in the mobile gaming segment when it released the VIVO IQOO gaming smartphone in China.

Perhaps to no one’s surprise, the VIVO iQOO runs on Android 9 and is powered by Qualcomm’s Snapdragon 855 chipset, however, the device gets a couple of features which makes perhaps makes it a mobile gaming beast; left and right pressure-sensitive “Monster Touch” shoulder buttons on the mid-frame, new vapor cooling system which in unionism with other software features helps avoid dropping frames, prioritize system resources and seamlessly switch between 4G and WiF. 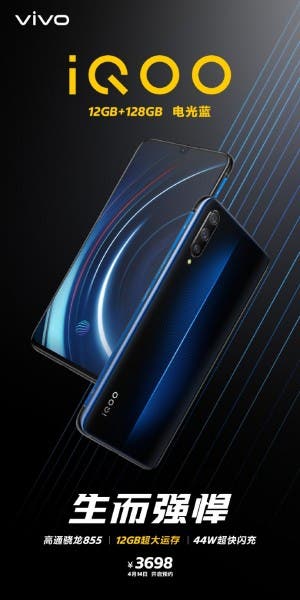 Its been barely a month since the IQOO arrived only in four configurations – 6GB/128GB, 8GB/128GB, 8GB/256GB, and 12GB/256GB, and the brand is today adding a new storage option to the mix. The most premium variant of the IQOO – the 12GB RAM option is by today’s announcement now available not only in 12GB/256GB but also now in a 12GB/128GB combo, giving users more options to choose.