A few months back, when Redmi became an independent brand, there were no assumptions what a beast it will turn into. Now, when the first models sell like a hotcake, the company has decided to make a move that is expected by everyone – it is going to release its own flagship packed with the most powerful mobile platform. But we don’t know much about this phone. So we have to piece together everything we hear in order to form a complete picture. 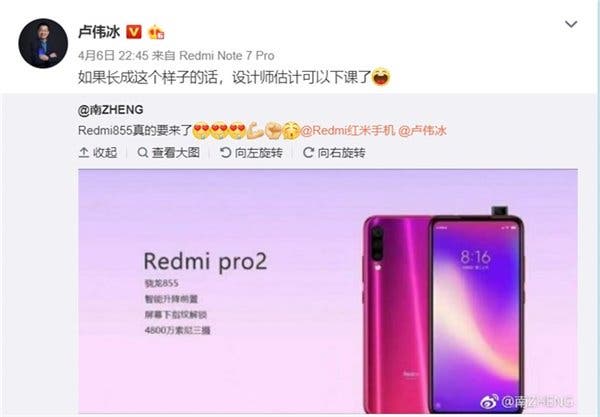 At the end of last month, Lu Weibing once stated that ‘there is no plan for the Redmi flagship sporting a Snapdragon 855 chip in the near future’. He also added that their main task is to generate over 10 million sales. So there is no need to ask too much about this, because ‘it is still early’ and he ‘will not reply.’

But recently, we began getting more and more news concerning the upcoming Redmi flagship. Once Lu Weibing even said it will be using the pop-up camera design, at the same time sporting a three-camera module on the back.

Today, we learned about another feature. The Redmi general manager said it will retain the 3.5mm headphone jack. As you know, to bring a more integrated design, more and more smartphone makers remove the earphone jack. Maybe, Redmi will do the same for other models, but it does not intend to design it on the flagship phone.

Unfortunately, we don’t know much about the Redmi flagship. It’s only known it will be equipped with a Snapdragon 855 chip. At last, it’s expected this phone will be considered to be the cheapest SND855-powered smartphone.

Next No Need To Change Cards For 5G Calls, At Least In Beijing