Today, Honor president, Zhao Ming, announced that the Honor V20 will be the first smartphone to adopt the recently released “Ark compiler”. According to Huawei, without upgrading the hardware of the phone, the performance can be greatly improved, the system will be smoother, and the APP can run faster. “The super speed experience is coming to Honor V20 in early May)” Ming said. At the official launch of the Huawei P30 series in China, Huawei announced the revolutionary “Ark Compiler”, which according to the company can significantly improve the Android system performance through architecture-level optimization.

According to the official introduction, the Ark compiler is a revolutionary breakthrough in Android performance. This is the industry’s first multi-language joint optimization compiler. It is reported that the Ark compiler can complete the compilation of all the code in the development environment. After the application is installed on the mobile phone, the program can be run at full speed without relying on the virtual resources, which brings great improvement in efficiency. 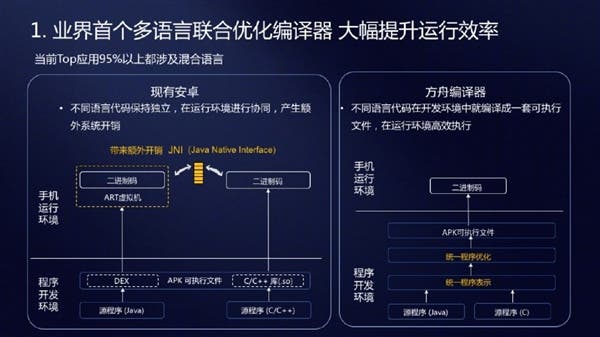 Huawei claims that the Ark compiler can improve system fluency by 24%, system response speed by 44%, and third-party applications by 60%. Just like the Android system, Huawei’s Ark compiler is open source and Yu Chengdong, CEO of Huawei Technology, called on app developers to further work on this feature which can bring a new experience. With the exception of Apple which makes use of its own iOS system, most OEMs makes use of the Android system. However, Google allows manufacturers to customize the Pure Android system as they deem fit. As a result, the final operability of the same Android version from different manufacturers may be completely different.