Market research firm Canalys recently released the latest shipment statistics report on the Chinese smartphone market. The report shows that in the first quarter of 2019, Apple‘s iPhone shipments in China fell by 30% year-on-year. In contrast, Huawei’s contrarian growth of 41% continues to dominate. 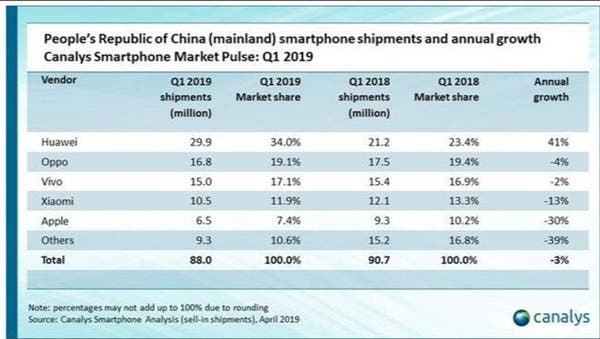 According to the report, in the first quarter of 2019, China’s smartphone market shrank by 3% year-on-year, with total shipments of 88 million units, the worst market performance in six years. Huawei is still the market leader in China and is the only mobile phone manufacturer among the top five mobile phone manufacturers to grow against the trend. Huawei’s (including Honor) smartphone shipment was 29.9 million, and it’s market share has increased.

For Apple, in the first quarter of 2019, the iPhone shipped only 6.5 million units, the biggest decline in two years, a drop of 30%, and the market share dropped from 10.2% to 7.4%. Canalys analyst Mo Jia said: “Apple’s performance in China is worrying because the worst quarter of iPhone shipments is usually the second or third quarter, not the first quarter. After all, the new iPhones are still fresh.”

Next Google Pixel 3a and Pixel 3a XL: colors and new details revealed