The Redmi Snapdragon 855 smartphone is arguably the most anticipated smartphone in the industry for now. To make matters worse, Redmi has been quite stingy with the specs of this device and we keep confirming what to expect in trickles. Now, reports out of China suggests that the internal code of the Redmi Snapdragon 855 flagship is “Raphael”. According to the report, the Redmi SD855 flagship will also have a 256GB version and a manually open “GPU overclocking” feature. This report is unverified thus its best to take it with a grain of salt 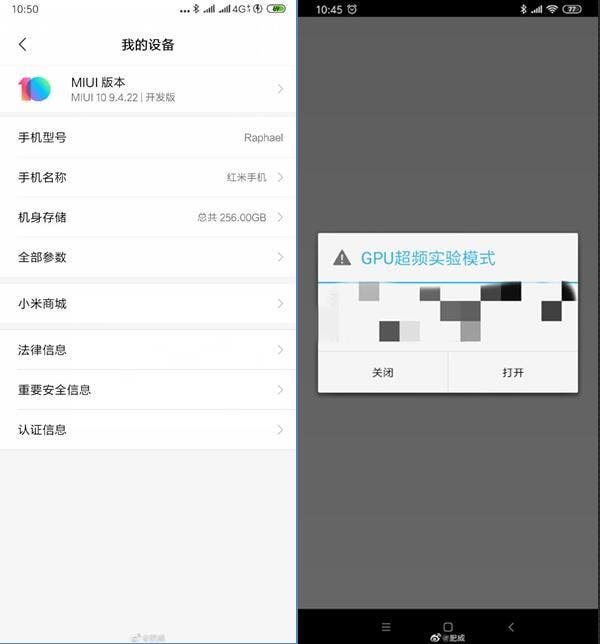 One of the biggest highlights of the phone is that it will be equipped with a Qualcomm Snapdragon 855. This will be the first Redmi phone to come with the flagship processor joining the likes of Xiaomi Mi 9, Lenovo Z6 Pro, Lenovo Z5 Pro GT 855 version, Samsung Galaxy S10 series, Sony Xperia 1 and a few others. This smartphone will also likely use a pop-up camera design and it will also be the first Xiaomi device to use this design. Lu Weibing earlier stressed that the Redmi flagship comes with a very narrow chin, retains the 3.5 mm headphone jack and it will be the first “real full screen” flagship of the Redmi series.

Looks like Xiaomi plans on adding GPU overclocking support to one or more of its Snapdragon 855 flagships. New clock of 810MHz spotted.

Recently, a Mi fan asked Lu Weibing, the general manager of the Redmi brand: “I hope that the upcoming Redmi flagship would use the super wide-angle lens.” Lu Weibing responded “yes”. In addition, Lu Weibing revealed that the Redmi Snapdragon 855 flagship has a more powerful camera and a long-lasting battery life. Though the specifics were not mentioned, we expect a 48MP Sony IMX586 sensor and a battery capacity no less than 4000 mAh. Most important is the price, this could be the cheapest SD855 smartphone.