After a whole year focusing on the India market, Realme smartphones proved to be a success among customers. Now, the company wants to give a new step that will begin with its debut in China. While an arrival in the old continent was also expected for sometime in June, the company surprised us with a new poster that announces its arrival at Europe – Realme is coming to France in just a couple weeks. The invites were already sent out for an event in Paris, scheduled for May 24.

The invite is pretty clear – The Realme 3 Pro will be the biggest start of the show. Since it’s currently the best smartphone of Realme’s portfolio its launch in France isn’t a surprise. However, the launch of the Realme X a higher-end phone with a pop-up camera and Snapdragon 730, in the coming days – May 15, could also indicate its possible launch in France. 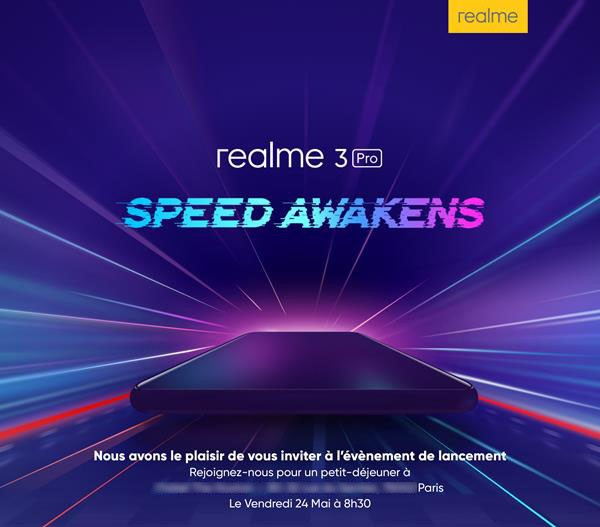 Since Realme has plans for a great Europe expansion, we believe that France will be only the first step in the region. We believe that in the coming months the company will also establish its presence in some other markets with good reception for Chinese midrange smartphones, such as Spain and the UK. While this still needs an official confirmation, Realme is rapidly growing in the Global scene, so a fast debut in more European markets wouldn’t be a surprise.

The Realme 3 Pro is an excellent midrange smartphone that comes to compete with the likes of Redmi Note 7. However, while the Global Redmi Note 7 is equipped with the 2-year-old Snapdragon 660, the Realme 3 Pro comes with a faster Snapdragon 710, that until now was only present in smartphones beyond the $300 mark. Realme’s portfolio will surely add some extra juice in the European fight for best-value-for-money smartphones.