Chinese manufacturer, Redmi, is expected to release the Redmi K20 series on May 28. As of now, the complete spec of these smartphones have been speculated and the only suspense is perhaps the price. Today, Pan Jiutang, a partner of Xiaomi Industry Investment Department, said that in the past two months, the industry has released many wonderful good products. He added, “I personally think that the Redmi K20 series best choices for the price will be between 2000 yuan ($289) – 4000 yuan ($578), I like it very much.” 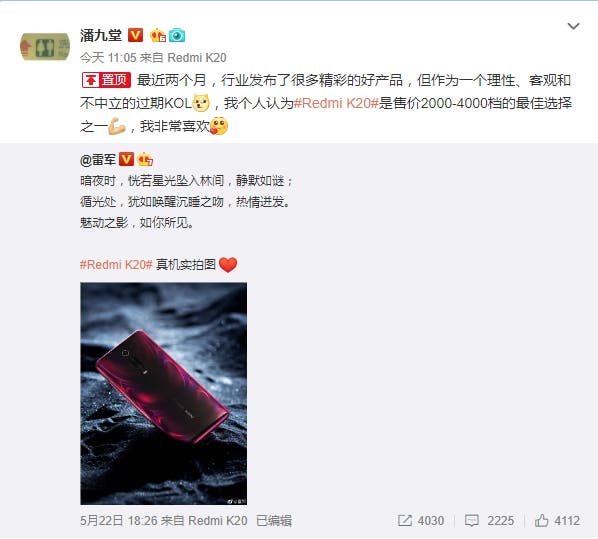 It appears that this is a personal assessment for price from Pan Jiutang but it is still the best speculation we have for these upcoming smartphone. The Redmi K20 series has two models which include Redmi K20 and K20 Pro, of which the K20 Pro is equipped with a Qualcomm Snapdragon 855 flagship platform.

From what we know, the Redmi K20 Pro adopts a true full-screen display and it uses a pop-up camera.  It will come with a triple rear camera setup and one of them is a 48MP super wide-angle shooter. The battery capacity is 4000mAh and its on-screen fingerprint sensor is the 7th-generation sensor, better than that on the Xiaomi Mi 9.

In addition, the Redmi K20 series will also be equipped with Game Turbo 2.0. Lu Weibing, vice president of Xiaomi Group and general manager of Redmi brand, said that “we will launch Game Turbo 2.0 this time. There is no need to say more about the number of frames. The touch is a leap upgrade so that when discussing Redmi K20 internally, many people could say is good for gaming…”