Today, a new Huawei smartphone with model number GLK-LX3 appeared on the GeekBench database with a single-core score of 1538 and a multi-core score of 5388. Looking at the scores of this device, this smartphone probably uses the Kirin 710 SoC. According to informed sources, this device which is listed with 4GB  of RAM belongs to the nova series, most likely, Huawei nova 5i. It is worth mentioning that a new Huawei smartphone with model number SEA-AL10/TL10 recently passed TENAA and it is speculated that this will this is the nova 5. 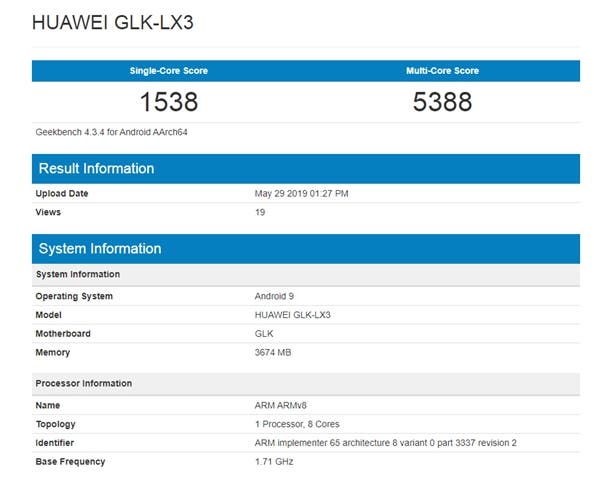 According to the information released by the National Quality Certification Center, Huawei’s SEA-AL10/TL10 new machine is produced by Flextronics in Zhuhai, and it comes with a 40w super fast charging technology. This is Huawei smartphone outside the P and Mate series to support a 40W super fast charge. In addition, Huawei nova 5 may support a screen fingerprint recognition and is expected to become the first screen fingerprint phone of the nova series. In terms of configuration, Huawei nova 5 may be equipped with the Kirin 980 processor, which is the world’s first mobile phone chip based on 7nm process technology. Kirin 980 is the first to implement a Cortex A76-based developer and the industry’s first commercial Mali-G76 GPU chip.