Yesterday, Canalys released a new forecast document for the smartphone market. According to it, smartphone shipments will reach 1.35 billion units in 2019, a YoY decline of 3.1%.

All predictions are based on the multi-factor analysis. But the source emphases a few of them. As you guess, this is mainly related to the trade war between the US and China. The US restrictions will hurt Huawei a lot. The latter is the world’s third smartphone maker, and one of the main reasons why it doesn’t ship more is the US ban.

‘it is important to note that market uncertainty is clearly promoting vendors to accelerate certain strategies to minimize the short- and long-term impact in a challenging business environment, for example, shifting manufacturing to different countries to hedge against the risk of tariffs. But with recent US announcements on tariffs on goods from more countries, the industry will be dealing with turmoil for some time,’ said Nicole Peng, VP, Mobility. 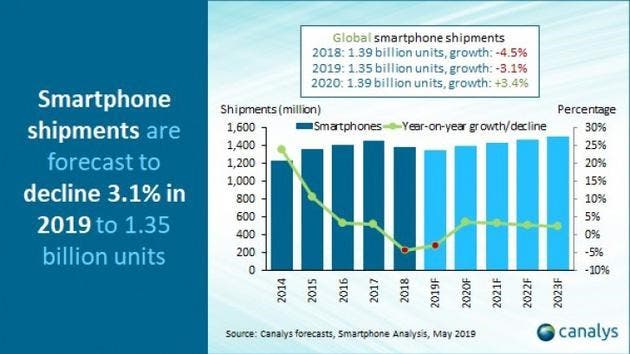 Also, Canalys analysts added that they are expecting the other major manufacturers to have short-term opportunities as well while Huawei struggles. In this sense, Samsung is going to be the biggest winner. Due to its aggressive device strategy and the ability of quickly ramping up production, the South Korean company may struggle to entirely fill the shortfall. ‘It will take other vendors until late 2019 to react to the new opportunities. Samsung’s control over component supply gives it a major advantage,’ added Rushabh Doshi, Research Director at Canalys.

The report also predicts, in 2020, most of the mobile supply chain and the channel will have active contingency plans to somehow mitigate Huawei’s decline and get ready for 5G device roll-out. Moreover, it’s guessed 5G and other innovations will push customers to make more purchases in 2020. This should provide a 3.4% growth in the smartphone market, reaching 1.39 billion units shipped.

Next Vivo Y12 with triple cameras silently debuts in India