July will be hot. Many manufacturers have announced about new phones that are going to hit the market next month. VIVO is no exception. It is going to launch the next Z-series smartphone on July 3. And this is the much-talked VIVO Z1 Pro. 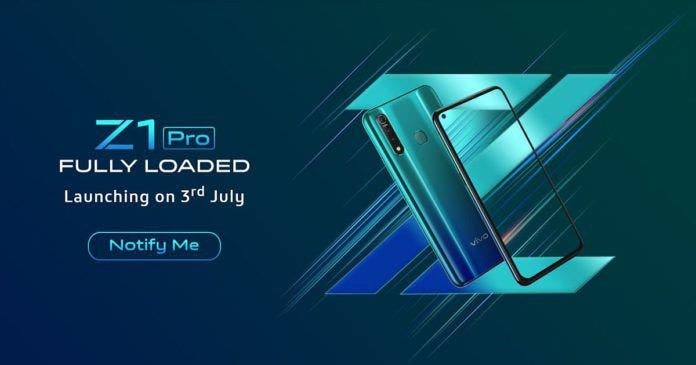 As MySmartPrice reports, the VIVO Z1 Pro will go on sale through online retail giant Flipkart. This phone will have three memory combinations of 4GB+64GB, 6GB+64GB and 6GB+128GB. Interestingly, we are dealing with the first Snapdragon 712 phone that is going to be released in India. Probably, many of you haven’t heard about it. This is a new SoC based on a 10nm process node. As the name suggests, its performance outruns that of the Snapdragon 710 slightly.

We have also heard the Z1 Pro will sport a 6.53-inch punch-hole screen, which has an aspect ratio of 19.5:9, a screen ratio of 90.77%, and a resolution of 2340 x 1080. Apart from this, under the hood, it will carry a 5000mAh large battery, a 32MP front camera, and run on Android 9.0 Pie. Nothing is known about the rear camera and their resolution. In other words, our protagonist is going to be a mid-ranger. Phones from this category have become highly demanded in India recently.

By the way, it’s rumored VIVO may launch a new S series along with the Z1 Pro. But this news is not confirmed officially.