Apple Watch could receive a camera in one of its next versions, in order to continue that process of liberation from the iPhone that will become increasingly marked starting with WatchOS 6.

To suggest the hypothesis of the camera we also thought about a patent that emerged towards the end of 2018 and today we return to talk about it following the approval of a second patent that returns to the topic and proposes an alternative solution. Also this time the positioning of the camera on the watch strap becomes central, in order to make it particularly flexible and suitable for any kind of use.

Last November, Apple envisioned an algorithm capable of correcting the distortion of the user’s face caused by the particular fixed position of the camera, while today’s patent suggests something more extreme. 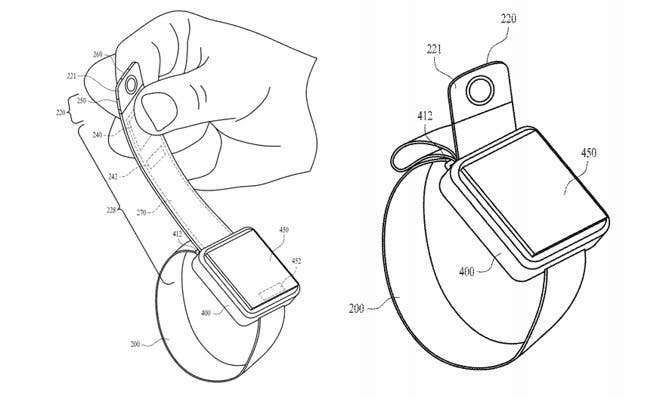 The solution described by Apple, in fact, provides that the Apple Watch camera can be integrated within a section of the strap that can be curved and stretched at will, so as to set the best angle according to the type of use. In addition to this, it seems that it will be possible to spin the end that houses the sensor on itself, so as to be able to use it to take traditional photos, or even include a second sensor on the opposite side, in order to take pictures and shoot videos at 360-degree.

Apple suggests that this section of the strap can be stiffened to maintain the chosen position so that the user does not have the hand engaged while using Apple Watch – for example – to make video calls via FaceTime. It also seems that the strap in question can have touch-sensitive areas, so you can interact with the camera (take pictures, record videos, and so on), these tasks can also be performed with voice commands.

The purpose of this solution, according to what is reported in the patent, is to increase the functionality of the watch to make the presence of a smartphone less essential in many scenarios; in this way the user could – for example – go out for a walk without having to take his iPhone with him and, at the same time, without having to give up the possibility of taking pictures and shooting videos. In short, a further step towards the independence of Apple Watch.