Nokia unveiled the Nokia 2 back in October 2017 with Android 7.1.1 Nougat. The ultra-affordable finally got an upgrade to Android Oreo back in March this year. While users were waiting for Android 9 Pie, news broke up today revealing that this handset will never taste such flavor.

When the Nokia 2 was released, it came with the promise of two years of software updates. For that reason, owners have been waiting for Pie to reach the handset. The customer support had also confirmed that Pie would reach the handset. But never specified any timeframe for this.

However, a Nokia community admin came today to reveal that the customer support had some kind of misunderstanding. As a result, the Nokia 2 won’t be getting the Android 9 Pie update. The reason is unclear, but we believe that it has to do with the fact that this device was released out of Android GO/One program. 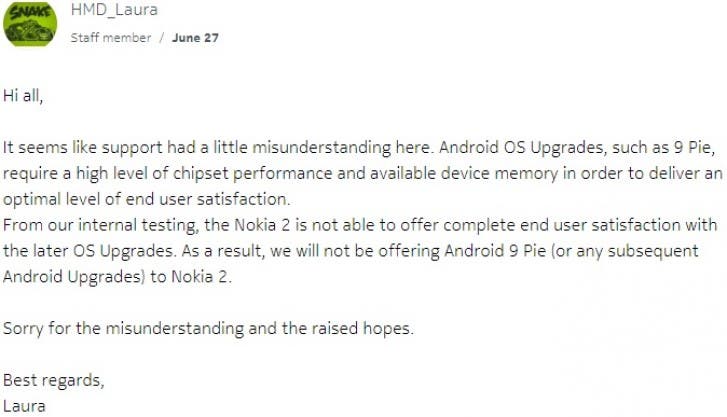 Some users were hoping for an Android Pie Go Edition update for the handset. Android GO is well known for delivering a solid software experience on a lesser spec sheet. However, HMD stated that since this handset wasn’t released with Android GO (It wasn’t available on Android Nougat era) they can’t bring Pie GO for it.

This may be heartbreaking for Nokia 2 owners, but at least, the device should keep receiving Android Security updates. HMD has been achieving a solid reputation for keeping its devices updated. The Nokia 2 will represent a step back but isn’t a surprise. We’re already in 2019, and the company will surely prioritize newer handsets. It’s sad, but that’s how the industry works.

Next All Huawei Mate 20 smartphones can now be updated to EMUI 9.1