Today, Lenovo Mobile officially released a preview poster of the upcoming Lenovo Z6 which will be arriving on July 4th. The poster reveals that this smartphone weighs 159g weight and will come with a 7.97 mm slim body to create an elegant and light touch. This has been earlier speculated and this official poster confirms earlier reports. 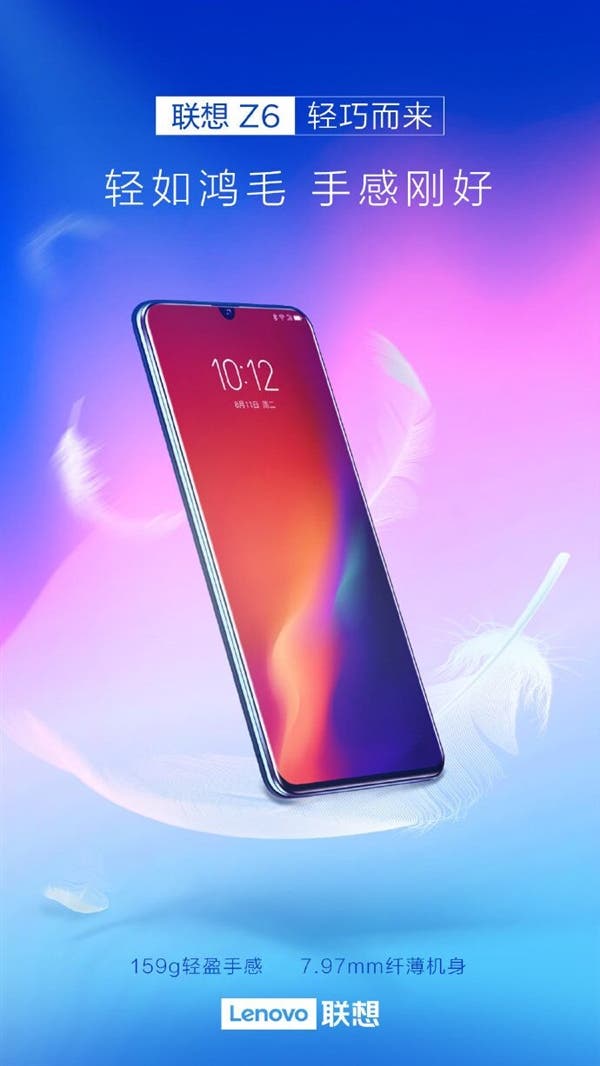 According to the official introduction, Lenovo Z6 has become the second 4000 mAh mobile phone with a thickness of 8mm or less. This smartphone adopts a lightweight design and it is 6g lighter than Meizu 16Xs, 14g lighter than Xiaomi Mi 9 and 47g lighter than OnePlus 7 Pro. Lenovo officials seem to be quite proud with the ability of the company to fuss a 4000 mAh battery is such a slim and light phone. The Lenovo Z6 is equipped with a Qualcomm Snapdragon 730 SoC which is built on the 8nm process. The CPU uses the same 4-series Kryo core as the Snapdragon 855. The main frequency is 2.2GHz, which is 35% higher than the previous generation.

In the camera sector, Lenovo Z6 will be equipped with a 24MP main camera + 8MP telephoto lens which can achieve 2x optical zoom and 8x hybrid zoom + a 5MP professional portrait blur lens. The main camera model is a Sony IMX576 sensor with a pixel area of ​​1/2.78 inches and a single pixel size of 0.9 microns.

For the display, the Lenovo Z6 is equipped with a 6.39-inch OLED to color laser screen, which accounts for 93.1% of the screen. It has a full coverage DCI-P3 color gamut, 33% higher than the traditional sRGB color gamut. The highest brightness reached 600 nits and the screen sampling rate is increased to 120Hz. In addition, the Lenovo Z6 is also equipped with the sixth generation on-screen fingerprint sensor.

Next Motorola P50 pops-out in a promo video; launching on July 15