A new model of the Galaxy A series is apparently in the offing. Reports about the imminent launch of a new variant the Samsung A30 dates back to early June, it, however,  pan out. And now, there is a renewed indication that it could be happening soon. Whether or not it will carry the Galaxy A30e or Galaxy A30s moniker remains to be known.

A Samsung Galaxy A series smartphone just cleared the Geekbench test. Its model number seems to suggests it is an A30 variant – perhaps the Galaxy A30S or A30e. The Galaxy A20 and A10 already got slightly modified variants with the E suffix on their moniker. So, that could be an indication that the new variant(number SM-A307FN) seen on Geekbench could come bearing the Galaxy A30e/s moniker. 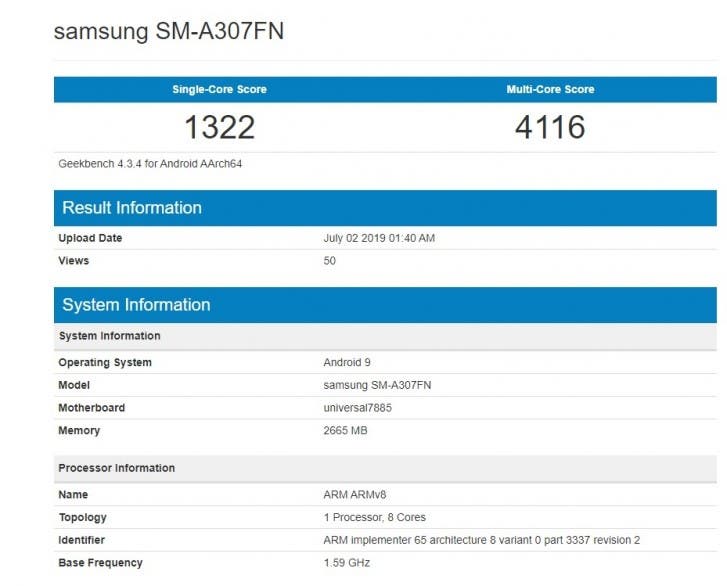 The supposed GalaxyA30e or Galaxy A30s took the test with 3GB RAM, Android Pie OS, and Exynos 7885 SoC. What is more, the performance scores are withing that of the standard Galaxy A30 – 1,319 for a single-core and 4,116 for multiple cores.

We are not sure what the A30e/s might bring to the table, though it is plausible it could get the Galaxy A20e treatment. And if that happens, then we expect a Samsung GalaxyA30e or Galaxy A30s with a smaller screen and less battery capacity.