According to preliminary reports released by Gartner on Thursday, after two quarters of decline in the PC market, global shipments increased by 1.5% in the Q2, 2019. The report also shows shipments in the second quarter of this year were 63 million units, compared with 62 million units in the same period last year.

Mikako Kitagawa, the senior principal analyst at Gartner, said that PC shipment growth in the second quarter was ‘driven by the refreshing demand of Windows 10 in the commercial market’. Particularly, he said, ‘Desktop PC growth was strong, which offset a decline in mobile PC shipments.’ The shortage of Intel chips has been fixed and is one of the reasons for the growing PC sales. 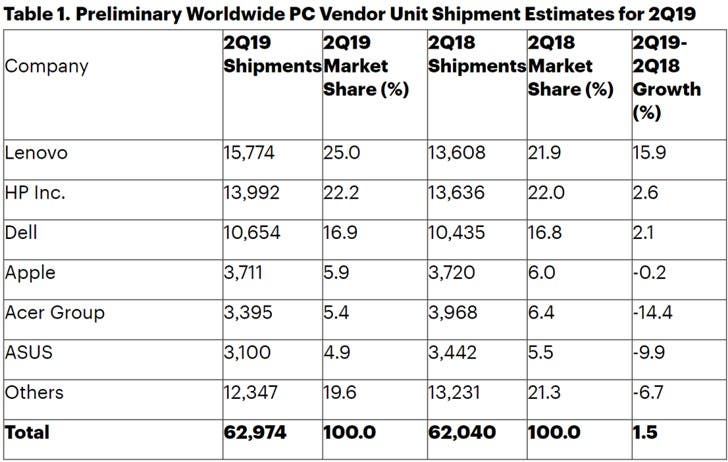 The same report discloses Lenovo, Hewlett-Packard, and Dell are among the top three PC manufacturers in the world, accounting for more than 64% of global PC shipments. Say in the second quarter of 2018, these three accounted for 60.7% of PC shipments.

Gartner said that in the United States, 14 million PCs were shipped in the second quarter, down 0.4% from the same period last year. Hewlett-Packard and Dell maintained their first and second places, respectively. As for the PC shipments in the Asia Pacific region, it fell by 1% from last year, mainly due to the weak Chinese market.

What to expect from PC market?

But Gartner also said that ongoing trade disputes and tariff threats will bring some uncertainty to PC demand in the near future.

‘While the U.S.-China trade war did not impact the PC market in the second quarter of 2019, the next phase of tariffs could have a significant impact. Most laptops and tablets are currently manufactured in China and sales of these devices in the U.S. could face significant price increases if the punitive tariffs are imposed and vendors do not take quick action to respond,’ said Ms. Kitagawa.