The Honor 9x, and perhaps the Honor 9X Pro arrives in a few days time both rocking the company’s Kirin 810 chipset. The Huawei sub-brand has been quite active teasing the upcoming devices, and only recently the company’s VP released some images of the device retail box hinting at a gradient design.

Schematics of both devices leaked a while ago, but never have we been treated to real renders/images of the device. That has now changed, as we now have official promo image revealing the device’s rear side.

The promo image essentially reveals two things; an X-pattened rear gradient design, and of course a triple rear camera with an LED flash. There is no visible rear fingerprint sensor, and that perhaps confirms it will get an under-display scanner if only both devices get Amoled display. Otherwise,  we may get to see a fingerprint scanner embedded in the power button, just like the Honor View20 and the Honor 20/20 Pro. 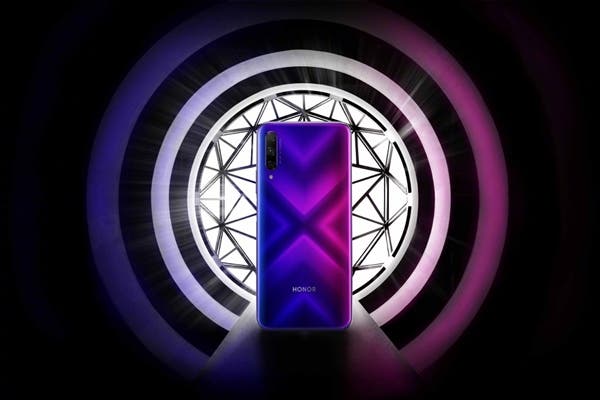 There has been quite some contradicting report regard the Honor 9X an Honor 9X Pro. Some reports say the standard Honor 9X will get a dual camera setup and triple setup for the 9X Pro.  While some other reports favor have it that the 9X and 9X Pro will get a triple and Quad camera respectively. We are not sure which is correct, so we can not say which appears in the promo image.

The Honor 9X will most likely ditch the notch for a pop-up camera mechanism. And based on previous leaks, we do know that the Pro version will get a 48MP Sony IMX582 primary camera with an 8MP wide-angle sensor and 2MP depth helper. And the standard variant, on the other hand, will get at best a 24MP main camera.  A 4,000 mAh battery with 20W fast charging for the Pro variant, and a 3750mAh battery with 10W charger complete the standard variant.