Today, two top executives from Xiaomi left the company. The first is Donovan Sung, the former Global Spokesperson of the company. Sung also played a role as a Director of Product Management. The second to leave the Xiaomi’s boat is Jai Mani, head of product of the Poco division.

Donovan Sung made the announcement earlier today via a twitter post. According to him, July will be his last month in Xiaomi. This is the end of the road for a five years journey that brought Xiaomi to the global scene. Sung played an important role during Xiaomi expansion in the last year. According to him, he will now be at Google in Singapore to help to bring their payment system, Google Pay, to emerging markets.

Jai Mani, on the other hand, used to be the head of the POCO subsidiary. The Poco’s name became a phenomenon last year with the arrival of Pocophone F1 and its flagship specs for a budget price. While Jai Mani didn’t make an official statement on Twitter, his Bio says “Ex-Product Manager of Pocophone and Xiaomi India. As previously mentioned, the Pocophone has caught everyone off-guard last year, and Jai Mani played a big role in the handset’s existence and success. Now, the future seems uncertain for a Pocophone F2. 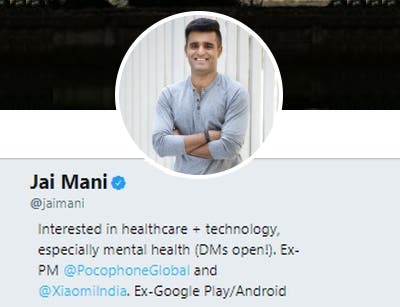 According to Android Central, Jai Mani has also been in Xiaomi for the last five years. Hugo Barra (Xiaomi’s former Global VP) hired Jai Mani to work on the company’s global expansion. Now his interest is on healthcare + technology with a focus on mental health. He is yet to have a new role somewhere else and his DM is open for offers.

Next DOOGEE S90 with modular design, priced at just $279