After reaching more than 200 million smartphones sold in 2018. Huawei does not despair of greatly improving this volume this year, despite the Ban by the US government.

The Huawei Group has become the world’s second-largest smartphone maker at the end of last year. And is planning to overtake Samsung by the end of 2019 thanks to very strong sales growth.

Since then, US President Donald Trump has signed a decree placing the Chinese giant on a blacklist. And singularly complicating its trade relations and supplies with the American companies and, by extension, various global groups. 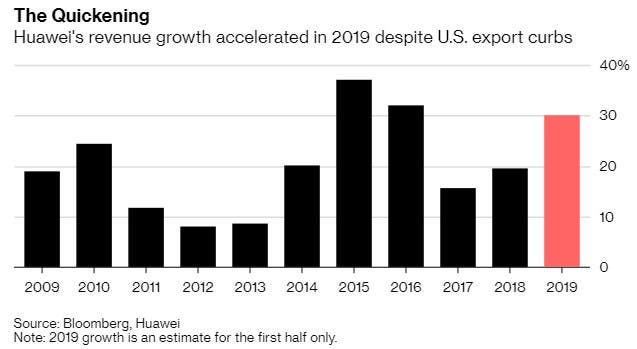 After having passed the milestone of 200 million smartphones sold in 2018, Huawei recorded a growth of its sales of 30% in the first half of 2019, which is better than expected.

This would bring the volume to 270 million units in 2019. Huawei has already passed the milestone of 100 million smartphones sold at the end of May. And it could still achieve this goal driven by end-of-year sales and perhaps an upcoming easing of US sanctions.

The 30% increase in sales despite Donald Trump’s decree was mentioned by Ren Zhengfei, the founder and CEO of Huawei in an interview with Yahoo Finance.

It remains to be seen how it can agree with the more or less severe fall in sales estimated by analysts, of the order of 40 to 60 million units, unless a jump in its domestic market.