The Realme 1 debuted back in May 2018. After a strong success, the Oppo’s lineup turned into a separate brand with affordable smartphones for India. More than 14 months have passed since then, and the sub-brand proved to be a success. With 11 smartphones released, the company is now a global brand and has just reached the 10 million shipments milestone.

The company revealed the impressive milestone, achieved between May 16, 2018, and today via a post on its official Weibo account. With a total number of 10 million shipments during that period, it’s easy to assume that the company approximately sold 22,000 Realme devices per day. 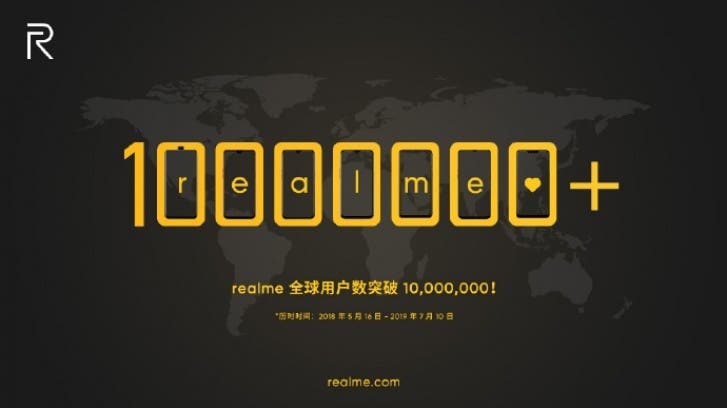 Realme’s journey started back with the Oppo’s Realme 1. Then the company made its own Realme 2 and 2 Pro, two strong hits. Their successors, the Realme 3 and 3 Pro came to the global scene with great specs even for today standards. Now, the company even has a proper premium midrange offering in the form of Realme X with Snapdragon 710, notchless display and a pop-up camera.

Every smartphone enthusiast out there has reasons to celebrate along with Realme. After all, the company is there to prove that there’s still room for more players in this competitive market. Despite, Oppo’s strong wings, the subsidiary traced its own path achieving the success that its mother company couldn’t.

Worth noting that the company is still giving its first steps in the global markets. If everything goes as planned its success will only grow in the coming months.

Previous Elephone A6 Max launched, first 100 gets a free smartband