Huawei has recently announced that it ill hold the Huawei Developers Conference from August 9th to August 11th. According to the company, the Huawei EMUI 10 will be officially unveiled at this conference. And according to an official poster, this system will arrive on the first day of the conference which is August 9th.

According to the company, EMUI 10 will break the terminal boundary and allow a seamless flow between devices. Wang Chengdu, president of Huawei’s consumer BG software department, said: “we will reveal this mysterious technology at the Huawei Developer Conference”.

At present, the exact details of EMUI 10 are very few. However, it is based on Android 10 deep customization. Considering that the official version of Android 10 has not been released, it may take a while to launch. This system will come with technologies such as GPU Turbo, EROFS super file system, and Ark compiler. 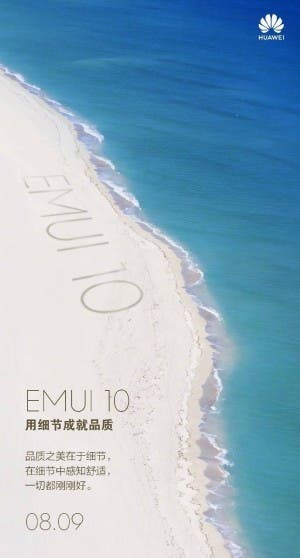 Honor devices that will get the next update:

According to Huaweicentral, the latest flagship smartphones should receive the update, as should some mid-range devices. Here’s the list of Honor devices that will get the EMUI 10:

It is worth to mention that recently, some users got the Huawei P30 Pro’s EMUI 10 internal tester package in advance and shared the first screenshots after early adopters.

Looking at the overall User Interface (UI), EMUI 10 and EMUI 9 are not much different. The difference that can be captured temporarily is the layout and color adjustment of the desktop weather plug-in. The drop-down menu bar uses a translucent background, which makes some of the option texts difficult to identify.

The current EMUI 10 ROM compilation is at the early stages thus there could be significant changes on the Huawei Android Q system before it hits the market. However, if there is anything that this system is appreciated for, its the speed and fluency.