Oppo is working on yet another budget smartphone dubbed Oppo A9s for the masses. As the name suggests, the smartphone is going to be a successor of Oppo A9 which made its way to the market a couple of weeks ago. It’s not like this is the first time that the upcoming A9s appeared on the web. Previously, the very same smartphone was spotted on the Bluetooth SIG database with CPH1931 as a model number. Well, the device has now surfaced again but with a different model number. Just like most of the leaks, this one too reveals some key details of yet-to-be-launched Oppo A9s. 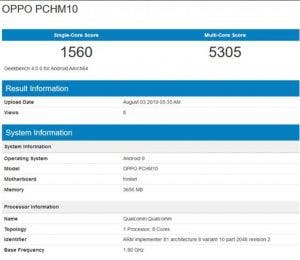 This leak comes courtesy of GizmoChina. As per the recent development, the new Oppo smartphone flaunts PCHM10 as its model number. The leaked specification of PCHM10 is similar to the device which we were talking about earlier. This means that both smartphones are in fact the upcoming Oppo A9s. It seems like the PCHM10 is the Chinese variant of the device while the CPH1931 targets the global audience. With that cleared out of the way, let’s have a look the leaked specifications of the smartphone.

In terms of specifications, Oppo A9s looks somewhat similar to the previously launched Oppo A9. As per the leak, Oppo A9s features an HD+ display with a resolution of 720 x 1600 pixels and a pixel density of 298ppi. Unfortunately, there is no information regarding the display size as of now. We might see a large 6.5-inch display just like the one found in the Oppo A9. If that’s the case, it will be worth noticing that the new device will sport a lower resolution as compared to its counterpart.

Unlike Oppo A9, the A9s will run on the Qualcomm Snapdragon 665 chipset coupled with Adreno 618 GPU. For those who’re unaware, the Snapdragon 665 SoC is manufactured over an 11nm fabrication process clocked at 1.80Ghz. The smartphone is seen running on 4GB of RAM with a 128GB of internal storage. All of these is expected to run on the latest Android 9 Pie with ColorOS 6.0.1 on top. On the battery front, we’re expecting a larger 5,000mAh capacity.

Since Oppo A9 just launched a couple of weeks ago, the official launch event of the upcoming Oppo A9s might not happen anytime soon. As of now, there is no solid information on the device’s price. Although we do expect more leaks to come forward in the future.