A little less than a month ago, Qualcomm announced the Snapdragon 855+, a revised and corrected version – or better to say overclocked – of the chip that animated almost all top-end smartphones of the first half of 2019. Many of the manufacturers will adopt it for the last devices of this year, but in 2020 the score will change and the new melody will respond to the name of Snapdragon 865.

However, the next-generation SoC seems to be already well underway in its development process. Given that an alleged first test concerning it has just leaked into the network. In fact, on Geekbench, the Snapdragon 865 has started to show what it is made of, regulating the entire current competition in multi-core, the result is an excellent score of 12946. Even the Apple A12 Bionic chip, so far a reference point in the mobile sector, has managed to put it in difficulty, remaining at almost 2 thousand points behind. 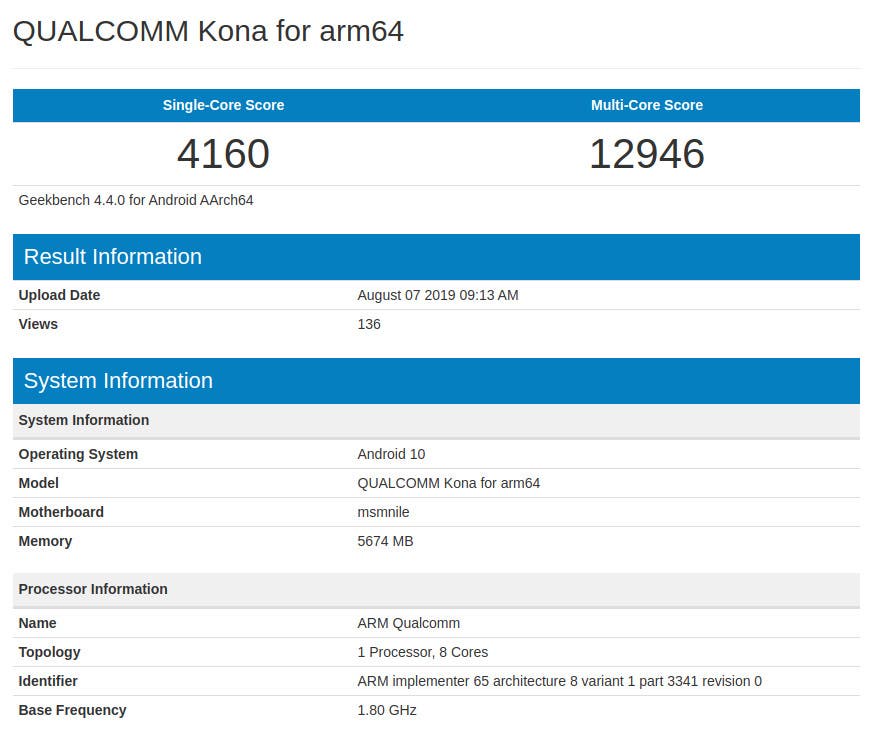 Different speech in single-core. With the 4160, Snapdragon 865 points are not sufficient to affect the record of A12 Bionic (4700 points). And not even to surpass the new Samsung Exynos 9825 (4,500 points). Which is integrated in the Galaxy Note 10 series. However, the new Qualcomm SoC has run on a prototype device, updated to Android Q, so it still has huge room for improvement in view of the future full hardware and software maturity.

Finally, we close with a clarification on the word Kona, which you see appearing in the header of the benchmark. Qualcomm should, in fact, launch two versions of Snapdragon 865. The first, called Kona, will integrate the new 5G Snapdragon X55 modem. Expected as the true step of entry into the 5G era. While the second will be without it (ie it will have a classic LTE modem) and will be called Huracan.

Previous Samsung Galaxy A90 with 5G gets Bluetooth SIG certification