Recently, Samsung has filed for nine new trademarks which suggest the company’s new Galaxy A series phones are coming soon. The uppper mid-range series smartphones have been extremely popular with the consumers in India as well as abroad.

There has been a leak t suggesting that the upcoming Galaxy A series will be coming with three or four rear camera sets. There is a roadmap shared by tipster Sudhanshu Ambhore, which details every Galaxy A series phone scheduled for 2020 release and its camera configurations. There are supposedly 7 different main cameras ranging from 13MP to 108MP and the defining feature of the Galaxy A-series’ cameras will be the ultrawide lens. 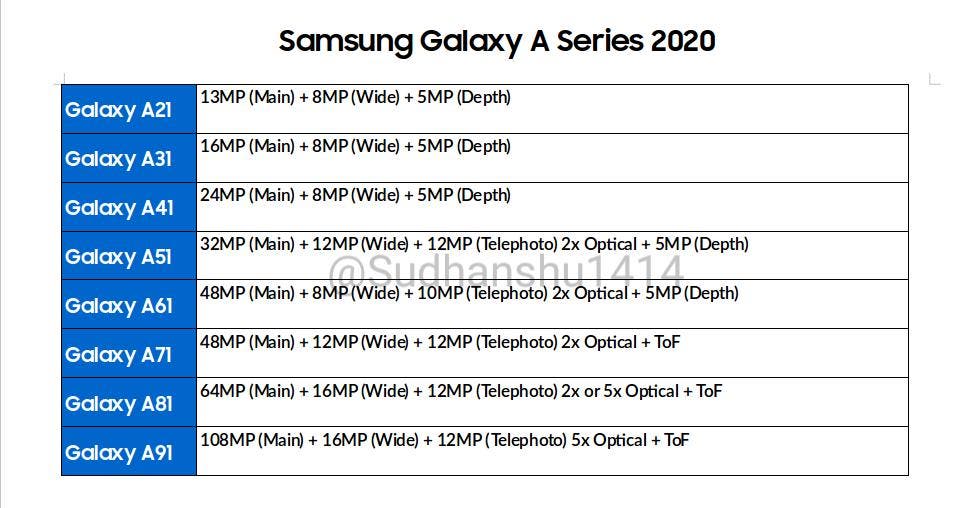 The A-series is popular because of its great screen, great battery life, good design and decent cameras. The lower-tier Galaxy A21, A31 and A41 will be the only ones without a telephoto option and will stick to a regular and an ultrawide lens. The Galaxy A81 and Galaxy A91, the upper-tier will have 5x telephoto options, first time for a Samsung phone.

With the help of Samsung’s new ISOCELL sensors, the Galaxy A81 and Galaxy A91 will also have a 64MP lens that will output 16MP snaps and the 108MP lens that promises 27MP images. More info should come soon for the lineup so stay tuned.

Here are some key camera specs of Samsung Galaxy A series of 2020. pic.twitter.com/c7YifHcNUX