The Realme 5 which will be officially presented on August 20th had a few days back appeared on Geekbench revealing some interesting internal hardware by one of the fastest-growing brands in India. Now, with only a few hours to the official debut, the Geekbench has again played host to another Realme made phone believed to be the Realme 5 Pro.

Bearing the model number RMX1971, the supposed Realme 5 Pro runs Android Pie and is powered by the same SoC previously used on the  Realme 3 Pro – the octa-core processor coupled with 8GB RAM. Do note that there are reports that say the Realme5 Pro will get the SD 712 and not the 710, so it is plausible the Geekbench got it wrong this time around. Whatever be the case, the performance scores are not out below expectation. It returns 1143 and 4618 on the single and multi-core test in that order. 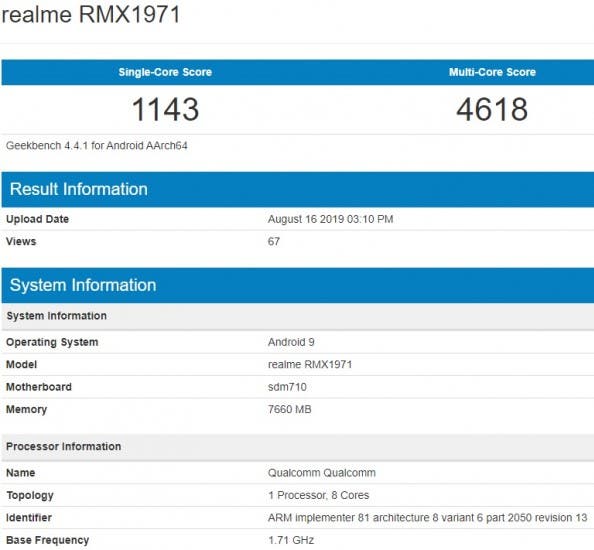 According to previous leaks and teasers, the Realme5 Pro much like the Realme 3i will get a diamond-cut design similar, a Quad rear camera setup, and a waterdrop notch display, slim bezel on top and the sides and a somewhat thicker chin. The camera setup will have a 48MP Sony IMX586 sensor as the main shooter, while a VOOC Flash Charge 3.0 support completes the list of all we know at the moment. The Realme 5 series was previously rumored to get a 64MP camera, but it only became clear recently that the Realme X and X pro might be the first to get the 64MP treatment.

The device alongside the Realme 5 will be made official at a launch event tipped for August 20 in India. Just keep a tab on us for all Realme 5 and Realme 5 Pro updates.