The Realme launches in six days and the handset has now appeared on Geekbench revealing some interesting internal hardware by one of the fastest-growing brands in India. Realme will be announcing three handsets on launch day – Realme 5/5 Pro, and a possible Pro model of the Realme X (prototype) with Samsung’s 64MP rear camera.

Coming to the Geekbench listing, the biggest headline will be the Snapdragon 665 SoC whi ch is also known as “trinket” and the model number for the Realme 5 is RMX1911. The Mi CC9e also appeared on Geekbench with the same name. Furthermore, there’s 4GB of RAM and Android 9.0 Pie on the device.

According to an exclusive report, the Realme 5 will feature an HD+ display and it will be priced under Rs 10,000. If that is indeed the case, then Xiaomi could have big worries as the upcoming Mi A3 features the same hardware, as far as the global Mi A3 model is concerned. The China launch for the series is slated for tomorrow. 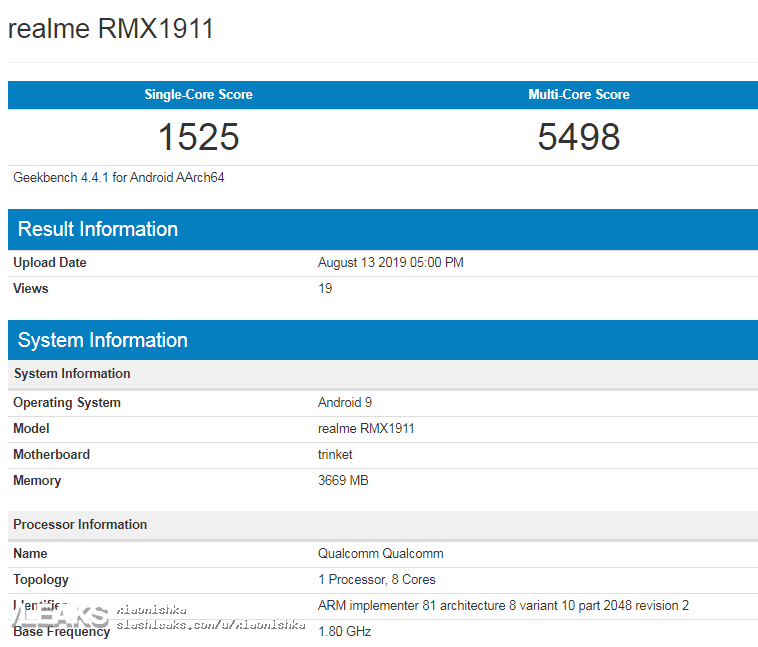 The Realme 5 series is expected to receive a quad-camera setup and rumours hint towards a 16MP primary camera sensor. The Realme 5 Pro is thought to step up the game with a 48MP primary sensor and the Realme X Pro will feature a 64MP sensor. Realme has been at loggerheads with current market leader Xiaomi and a mid-cycle refresh is seen as an offensive attempt to take on its Chinese counterpart.

Realme 5 Series Shipped Over 5.5 Million Units, Sold In India Only