As Realme India CEO Madhav Sheth said on Twitter, as of 2019, Realme has sold more than 5.5 million sets of Realme 5 series. The Realme 5 series includes the Realme 5, Realme 5 Pro, and Realme 5s. It is worth noting that all three smartphones are equipped with four camera configurations. 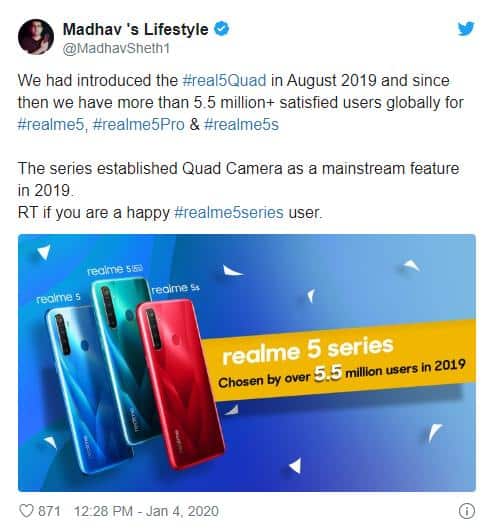 By the way, a new member of this family is on the way. The Realme 5i should hit the market soon.

As for the chronology, the Realme 5s was released in November 2019. It upgraded the main camera to 48 megapixels. Its features and configuration are almost the same as the Realme 5. The Realme 5s is priced at INR 9,999 (about $139) in India.

Prior to this model, the manufacturer launched the original Realme 5 and the Pro variant. The Realme 5 came with a Snapdragon 665 SoC. And it became the first handset in India with this SoC and a massive 5,000mAh battery along with a quad-camera setup. There are a 6.5-inch HD+ display and a 13MP front camera.

The Realme 5 Pro came with the Snapdragon 712 SoC. It is a marginally improved version of the Realme 3 Pro’s Snapdragon 710. However, as said above, the selling point of this series is the quad-camera. There was a 48MP primary sensor, a 119-degree ultra-wide sensor, a depth sensor, and a macro lens. The front carries a 16MP Sony IMX471 sensor with an f/2.0 aperture. It is powered by a 4,035mAh battery and VOOC 3.0.

Interestingly, although Realme was only sold in India in the second half of 2019, Realme’s three smartphones have successfully achieved sales figures of more than 5.5 million devices.