Apple is expected to release the iPhone 11 series devices during September. Despite the fact, that the handsets aren’t available in the market yet, Caviar, the excentric design company, went ahead and started offering customized versions of the new flagships.

The new design is still based on a prototype of Apple’s next flagship. It does include actual meteorite pieces, real pieces of the Moon, as well as a handful of precious stones and an actual moving tourbillon on the back. As you might expect, that variant is expensive at whopping $49,990. Furthermore, only a single unit of this handset will be made, making it a quite exclusive iPhone 11.

Of course, Caviar is aware that not everyone will pay such amount for a custom-made iPhone handset. For that reason, the company is offering a “cheaper” variant for R$7,710. For that amount, users will get an iPhone 11 Explorer with carved stone and titanium back. The overall design mimics the appearance of a satellite. 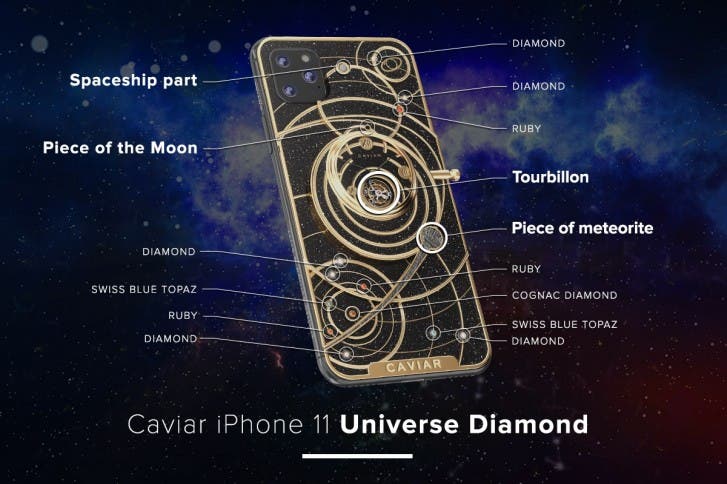 There is also a Soyuz variant for $5,590 that is “a proud celebration of Russian and Soviet spacemen” and has a tiny Soyuz-MS-01 made from parts of the actual spaceship. While Caviar is selling these custom version of the handset, none of the specifications have specified. After all, it’s an unreleased product. The company is also offering a Red-ish Apollo iPhone 11 for $4,800 and a Singularity version for $6,800.

In the end, anyone spending nearly $50,000 in a custom made iPhone 11, shouldn’t be interested in the specs.