The Mi MIX series always represents the most innovative stuff Xiaomi has to offer in the smartphone segment. This year’s Mi MIX 4 is expected to be a beast not only in terms of looks but also in terms of sheer hardware power. A new leak lays bare what goodies the upcoming handset will offer and it looks drool-worthy.

As per a tipster, a Qualcomm Snapdragon 855+ along with a curved screen and a ceramic body will make the Mi MIX 4 the magnum opus of Xiaomi’s current crop of handsets. But that’s just getting started. 45W wired charging, 30W wireless charging (fastest yet), 108MP camera, 1TB storage and MIUI 11 make this smartphone the Godzilla of all flagship handsets. 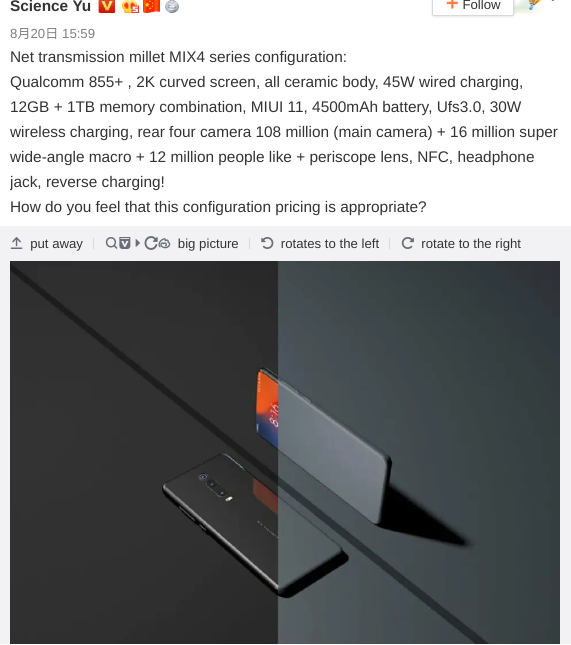 Then there’s a 4500mAh battery, UFS  3.0, a quad camera setup including a 16MP wide-angle lens, a 12MP sensor, and a periscope zoom sensor. Now, if all this sounds too good to be true, we should remind you that this is a leak although we definitely are expecting many of these features to end up on the device. It’s also likely that Xiaomi will officially reveal the handset next month (or October at the latest) as speculation about the phone has started to pick up a lot of pace. The MIX 3 was announced in October and there’s still no official word on a successor’s launch as of now.

Next Huawei opens its first authorized store plus in NW China