Last year, Fitbit entered into the smartwatch space with the launch of Fitbit Versa. In fact, the California-based company ended up adding two more products into the Versa lineup namely Fitbit Versa Lite and Fitbit Versa Limited Edition. Well, it’s been a year since the original Versa smartwatch came into the existence making it a perfect time for the next generation. Interestingly, Fitbit Versa 2 recently cleared its Bluetooth certification revealing few key specifications alongside. 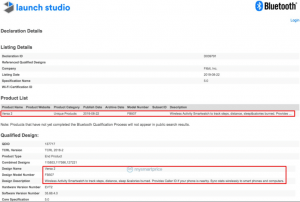 As mentioned earlier, the upcoming Fitbit Versa 2 recently made an appearance on Bluetooth Special Interest Group (SIG). The Versa 2 surfaced with the model number FB507 and is going to use Bluetooth 5.0 for connectivity. Apart from the model number, the listing managed to give us a few key specifications of the product. Unlike its predecessor, Fitbit Versa 2 will make use of an AMOLED display making it a significant upgrade. On top of this, Fitbit is planning to integrate Amazon Alexa smart assistant to the smartwatch. This means that users should be able to use voice commands for basic tasks. These tasks might include music playback, weather updates, quick internet search and much more.

We’re also expecting the smartwatch to come with a pretty decent battery life offering 4 plus days battery life on a single charge. For contactless payments, the wearable might feature NFC and MTP using the company’s own Fitbit Pay service. Since Fitbit as a whole focusses more on fitness, the Versa 2 is said to come with up to 18 different exercise modes. As of now, there is no word on the aesthetics of the wearable. Although we’re expecting the brand to continue with the square form factor just like the one we’ve seen on the first-gen.

Since this is the first-ever leak of the Fitbit Versa 2, we don’t have any solid information on the launch date as well as the expected pricing. Moreover, the brand has not confirmed the existence of Versa 2 as of now. On the other hand, the Bluetooth certification does indicate that the smartwatch might launch in the coming months. Well, whatever the case is, we will definitely update you the moment we receive further information on the same.