Last year, the Cupertino-based company released a relatively affordable model, namely the iPhone XR. Not surprisingly (or surprisingly for Apple), it has achieved a good market response. A lot of users called it the ‘Phone of the year’. About a year has elapsed, and Apple’s autumn conference is not around the corner. Of course, the manufacturer will announce the successor of its one of the most successful models. However, we still have no idea what new technologies and design solutions the company will bring to it. But according to the latest news, a new generation of iPhone XR will have a significant upgrade, that is, to use the Type-C interface. 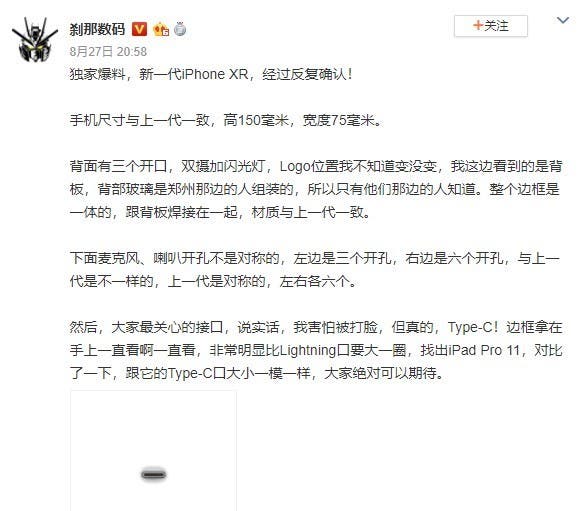 On August 27, a Weibo channel revealed some interesting information about the new generation of iPhone XR. It said that the size of the new iPhone XR is the same as that of the previous generation – 150mm in height and 75mm in width. There are three openings on the back of the phone that should refer to two camera sensors and the flash. On the bottom, the microphone and the speaker openings are asymmetrically designed. As you remember, the previous generation looks differently. Compared with the iPad Pro, we can see that the charging interface is significantly larger than the Lightning port. So the Type-C charging port can be basically confirmed.

Regarding the charging port of the new generation of iPhone XR, there have been various rumors. We also saw the new iPhone data cable’s charging head port will adopt the Type-C. If the new generation of iPhone XR can be replaced with a Type-C charging port, then the pace of standardization of the Apple camp and the Android camp has taken another step forward.

Next LG Roll smartphone appears in a couple of leaked renders