Yesterday we got a glimpse of the Galaxy A90 5G thanks to what seemed to be a promo poster. Thanks to it, now we know that the Galaxy A90 won’t come with a groundbreaking design such as the Galaxy A80. Instead, it features a more traditional design. Today a leaked retail box popped out in the web, giving us the best look of the design as well as key specs of the phone.

The Galaxy A90 5G will feature a notched 6.7-inch FullHD+ Infinity-U super AMOLED display. As you might expect there’s a 32MP snapper living inside the notch. As we already know, the A90 5G will be the most high-end device of the Galaxy A-series thanks to the Snapdragon 855 SoC. It will also be Samsung’s cheapest 5G offering.

Along with the Octa-Core chipset, the handset boasts 6GB of RAM and 128GB of expandable internal storage. Of course, we expect at least one more storage/RAM variant coming along with this specific unit. A variant with 4GB RAM and 64GB storage, while less impressive, would make things more accessible. 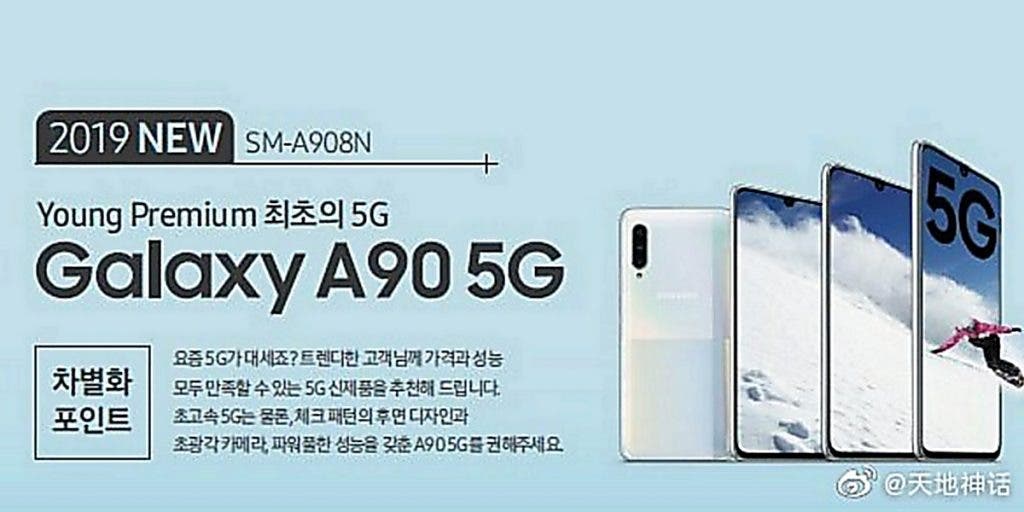 The Camera department of the Galaxy A90 has the aforementioned selfie camera and a vertical camera’s island on the back. The camera array comprises three shooters, namely a 48MP camera, 5MP, and 8MP modules. If you’ve been waiting to see Samsung debuting its 64MP ISOCELL sensor with the A90, sadly it will not be the case. While battery capacity has not been confirmed, we know that the handset will support 25W fast-charge support. The handset will ship with Android 9 Pie and OneUI running atop.

Samsung is quiet about the Galaxy A90 5G release, but considering the number of consistent leaks, it won’t take so long.

Previous Alleged Mate 30 spotted at 3C, launch may be delayed

Next Motorola One Zoom specs detailed in a new leak