After launching the Honor Vision Pro smart TV, Huawei is planning to unveil yet another smart TV in its homeland China. Like Vision Pro, the all-new Huawei 65-inch Smart TV comes with a pop-up camera back and is going to run on Harmony OS. For those who’re unaware, Harmony OS is the company’s take on Google’s Android system. Here is all the information which we have about the upcoming 65-inch smart TV. 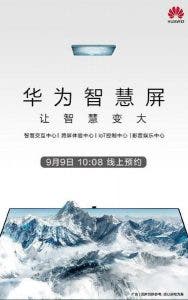 Apart from pop-up cameras, the upcoming television is going to be a Smart Home Control Hub with the help of AI-powered interactive user experience. We’re expecting the Huawei’s 65-inch smart TV to run on the HiSilicon Hi1103 chipset. The television could come with powerful sound systems, cloud services and much more. On top of this, we might also see other models of the television if the previous leak is to be believed. Recently, Huawei got the Bluetooth SIG certification for new televisions having model number HEGE, OSCA-550, OSCA-550A, OSCA-550X, and OSCA-550AX. There is no further information on the specs and features of the upcoming smart TV.

Huawei’s upcoming 65-inch Smart TV is expected to see its official launch on September 19 along with the upcoming Mate 30 series. Surprisingly, the television is already up for pre-orders via JD.com. As far as the pricing is a concern, we will have to wait for the official launch which is right around the corner. We might also see the upcoming 65-inch Smart TV make its way to the international market. If the company decides to launch the product globally, it would interesting to see how well it manages to perform considering the fact that it does not run on Android OS.