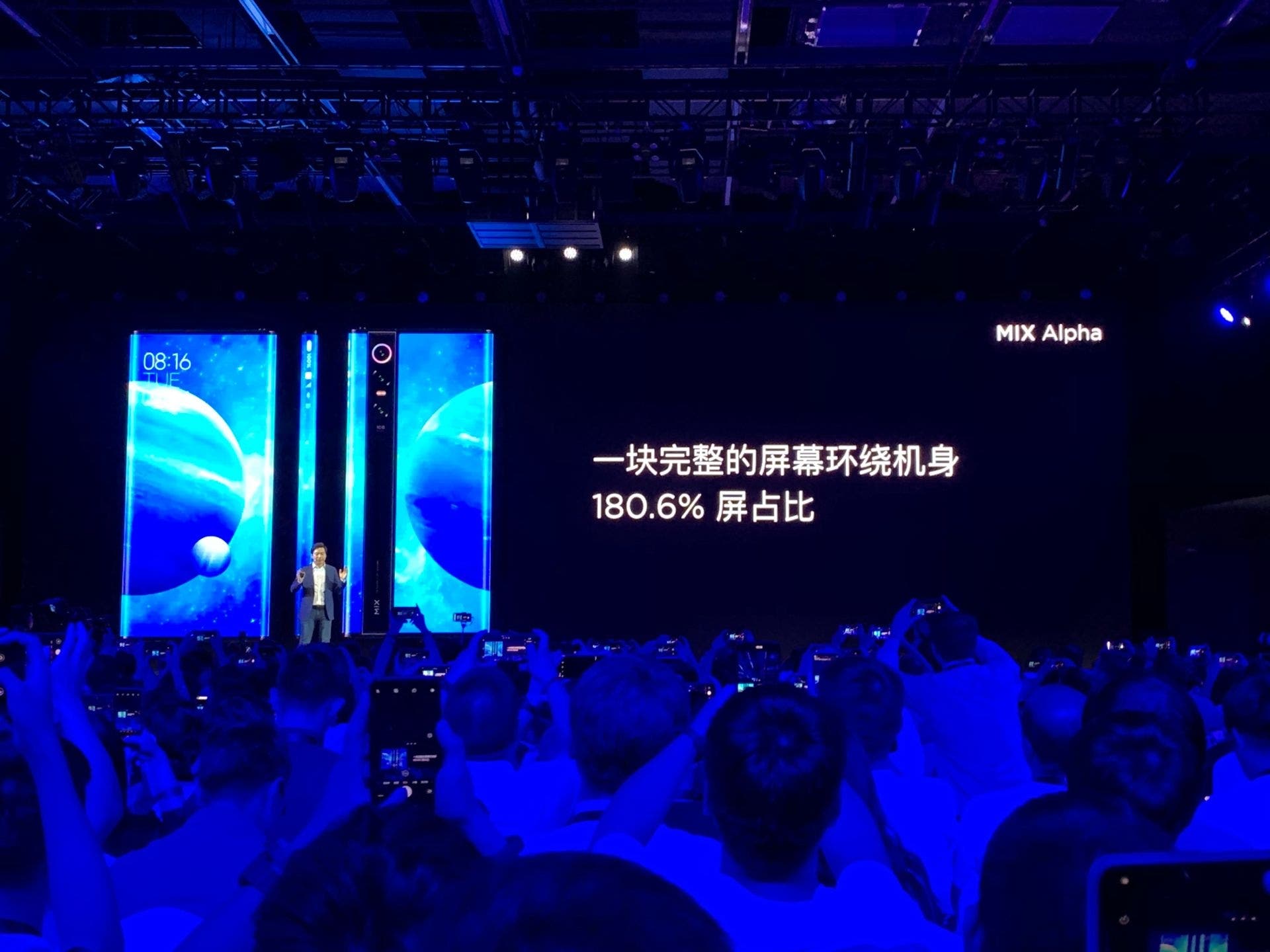 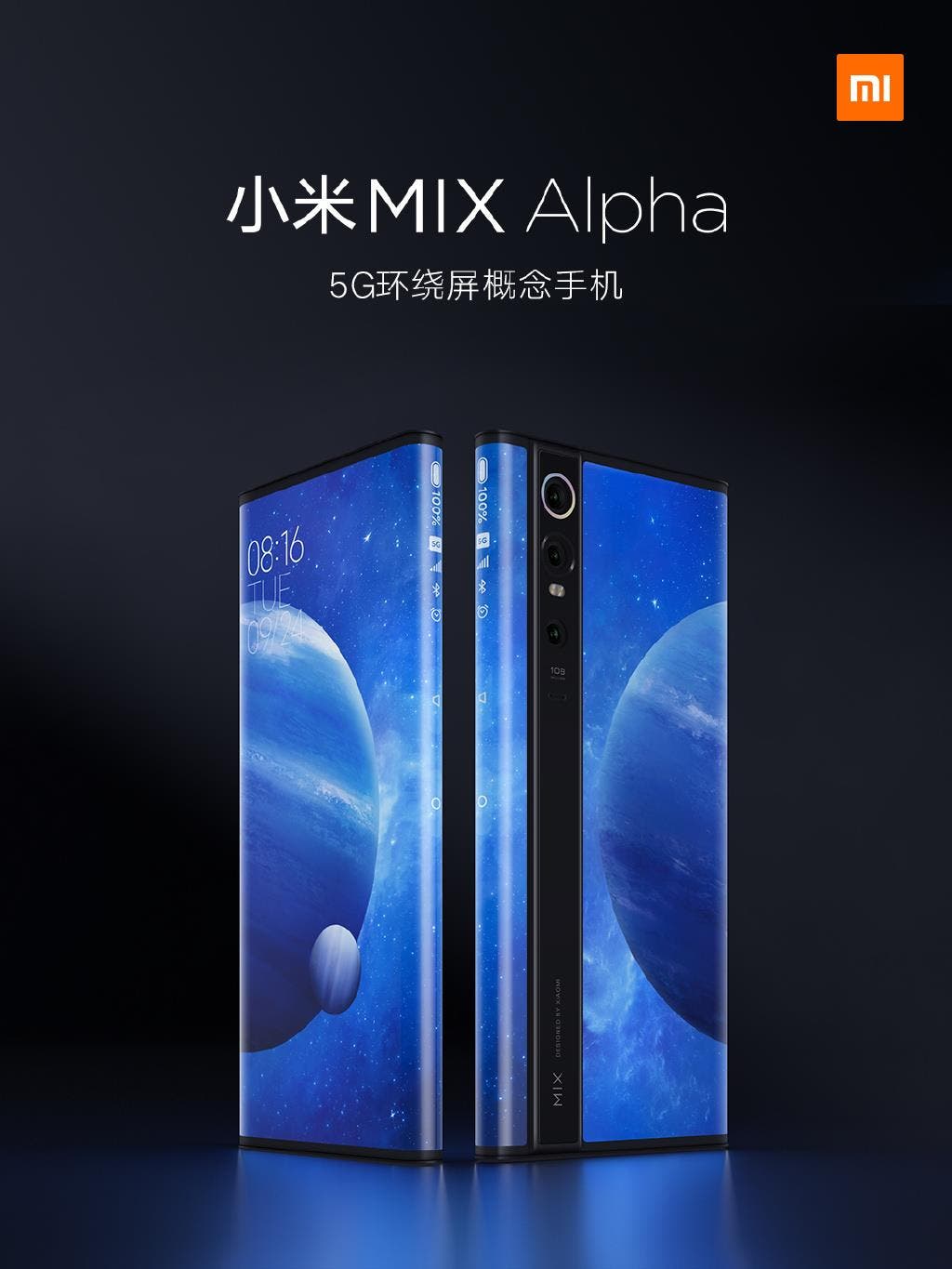 Mi MIX Alpha – What Does It Have To Offer

First off, the MIX Alpha comes with a design that sees the display completely wraps around the two side fuselages. This means that the display is larger than just the front surface. According to Xiaomi, this smartphone comes with a whopping 180.6% screen ratio which is the first in the industry. The Xiaomi Mi MIX Alpha is not a foldable phone. It doesn’t use a waterfall display either. Actually, the display of this device covers both the front, sides and much of the rear. However, there is a thin non-display vertical section on the rear that host the camera and other sensors. 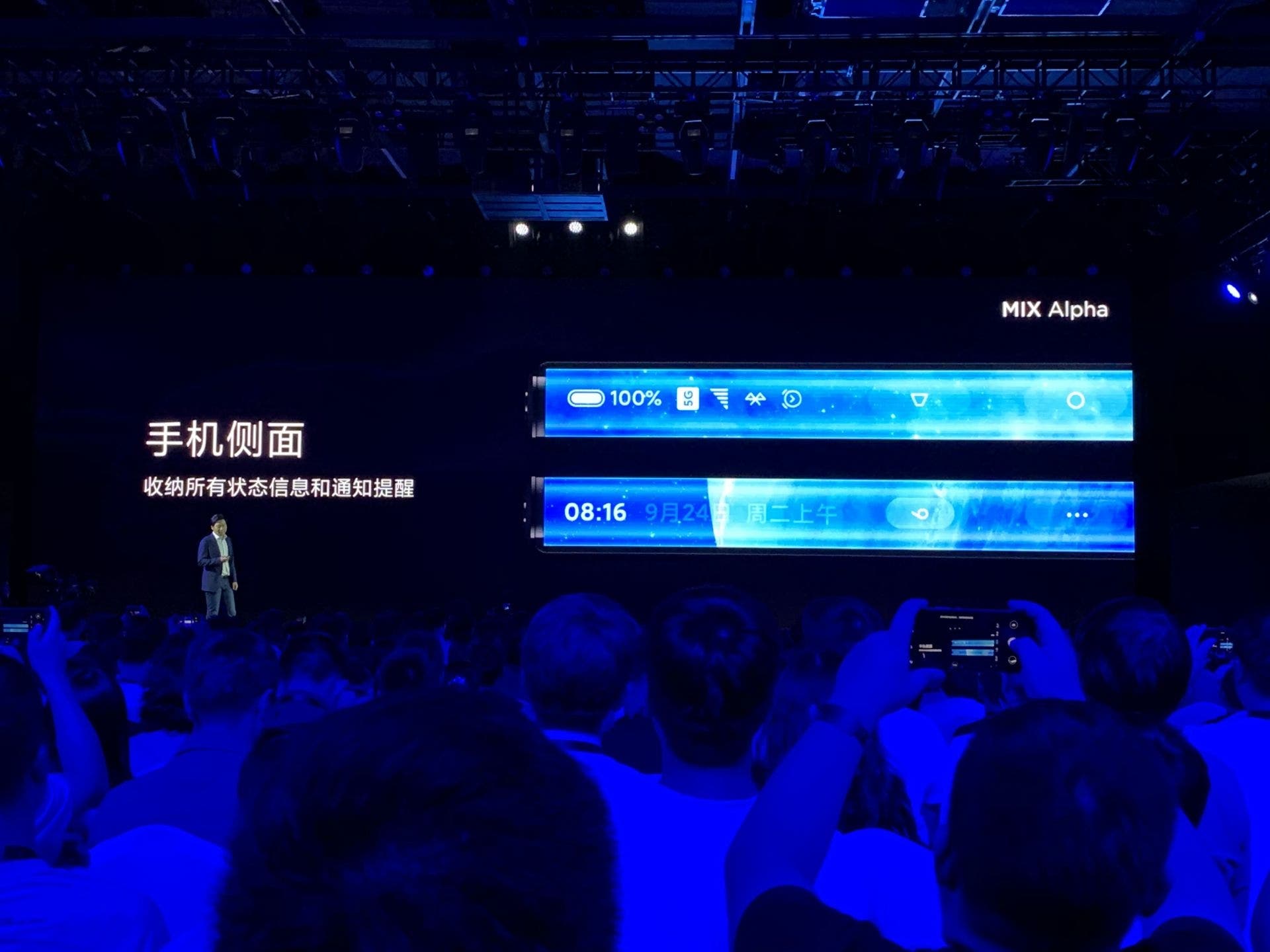 The MIX Alpha has a 7.92-inch flexible OLED screen with a resolution of 2088 x 2250. The power button is on the rear and its dimension is 154.38 x 72.3 x 10.4 mm and it weighs 241g. This device also comes with a new 360-degree screen surround technology and a 2.15 mm extremely narrow chin. The LCP high-integration antenna design integrates five antenna frequency bands to realize 5G dual-card full-network communication. The rear display of this device is suitable for light application but you can automatically reverse the phone screen. The MIX Alpha supports surround screen anti-touch technology. Thus, there is no accidental touch on the sides and it easily recognizes the display in use through multi-sensor + AI algorithm. This it uses to suppress touch in other areas. 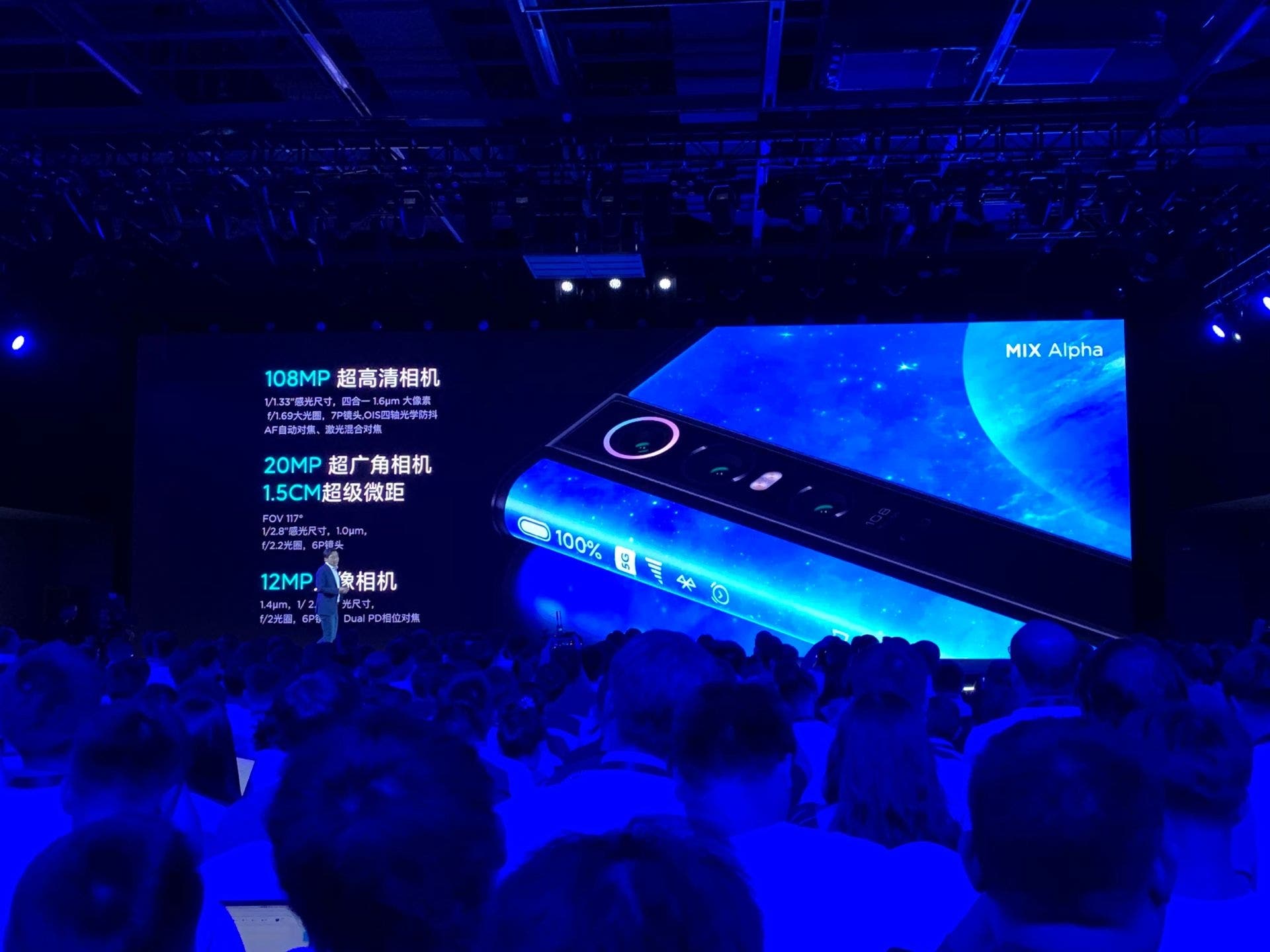 The display of this smartphone accounts for almost its entire body (front and rear). However, there is a thin non-display section on the rear. This section uses special build materials. It uses a titanium frame, black ceramic body, and a full sapphire glass protection lens. This gives this device a premium and luxury appearance. According to Lei Jun, Xiaomi has been developing this device for two years and the company has spent about 500 million yuan (∼$70 million).

In the camera department, the Xiaomi Mi MIX Alpha is the first-ever smartphone to come with a 108MP ultra-high-definition camera.  The resolution of its output is a whopping 12032 x 9024. According to Xiaomi, it collaborated with Discovery to launch the “100 million pixels to explore the beauty of the world” program. The Xiaomi Mi MIX Alpha comes with a triple camera setup. In addition to the 108MP Ultra HD camera, this device also has a 20MP super wide-angle camera (Sony IMX350). and a 12MP portrait camera. The 108MP Samsung HMX CMOS sensor has a photosensitive size of 1/1.33 inch, an f/1.69 large aperture, 7P lens, OIS four-axis optical image stabilization, and laser autofocus.

On the software end, Xiaomi customized the MIUI Alpha operating system to achieve pure content information on the front screen without any interference. The double-sided pressure-sensitive screen accommodates all status messages. The rear is preferable for light applications. 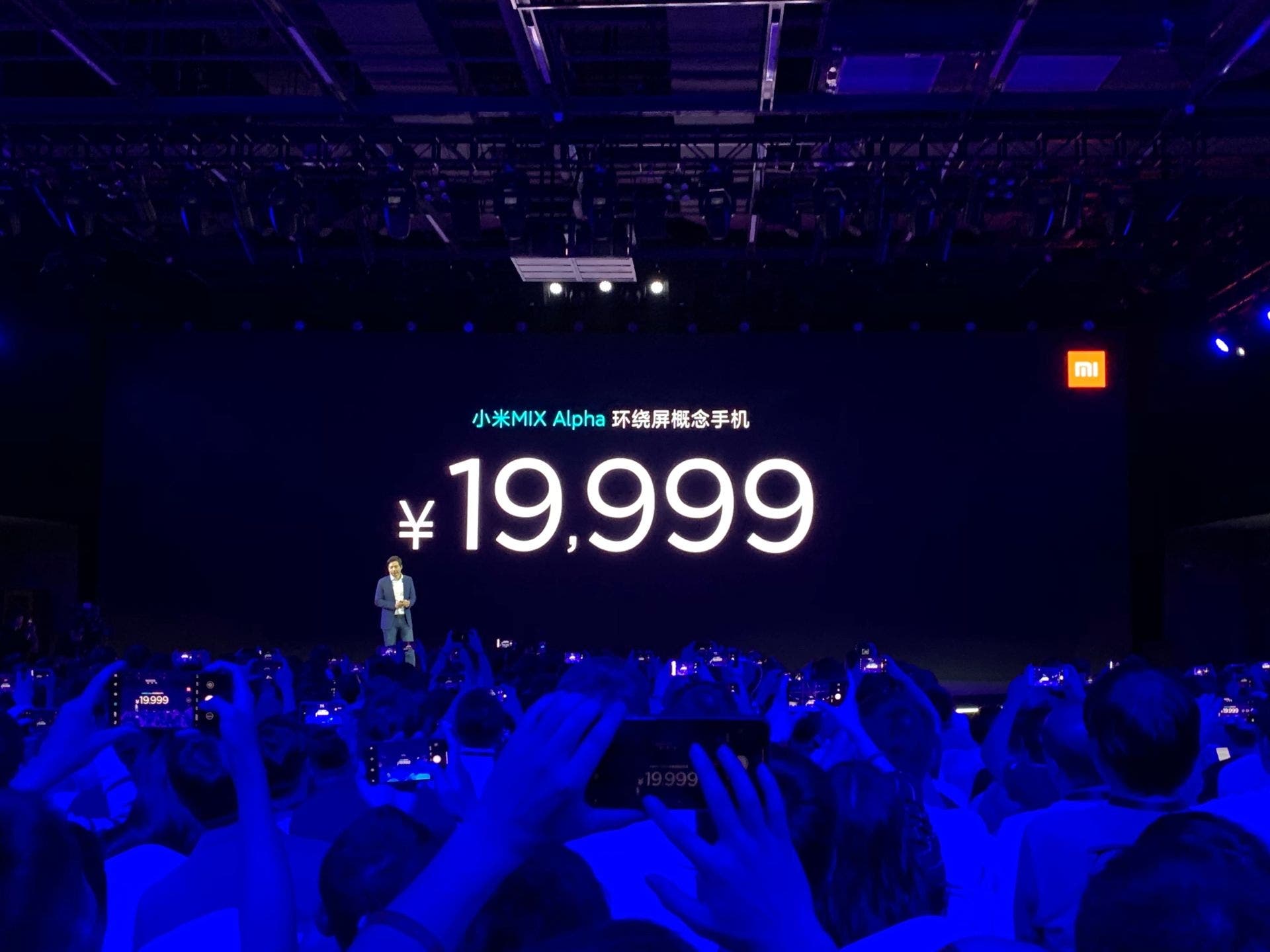 As for its pricing, the Xiaomi Mi MIX Alpha will sell for a whopping 19,999 Yuan (∼$2814). This is by far the most expensive smartphone from Xiaomi. At present, the Xiaomi Mi MIX Alpha is in mass production and will probably arrive the market in December. This phone is for folks with a very deep pocket thus we do not expect Xiaomi to produce much of it (it will probably be limited).

Next Xiaomi unveils the Mi TV Pro with 8K support