On November 12, 2019, Facebook announced Facebook Pay, a payment method common to all applications in the group: Facebook, Messenger, WhatsApp and Instagram. “People are already using payments via our apps. Facebook Pay will facilitate these transactions” says the firm in a press release. Developed in partnership with Paypal and Stripe, the service aims above all to harmonize the various payment tools of the social networks of Mark Zuckerberg’s group. the company states that Facebook Pay has nothing to do with Libra, its cryptocurrency project.

According to the company, Facebook Pay is compatible with most credit and debit cards on the market and, unsurprisingly, with Paypal and Stripe payment services. “Add your preferred payment method once, then use Facebook Pay to make payments and purchases on our apps” explains the company.

Not surprisingly, Facebook has put several safeguards in place to appease the fears of users. With this in mind, it is possible to configure Facebook Pay for one or all applications in the group. “We will not automatically set up the serice in the apps where you are active” reassures the California firm. 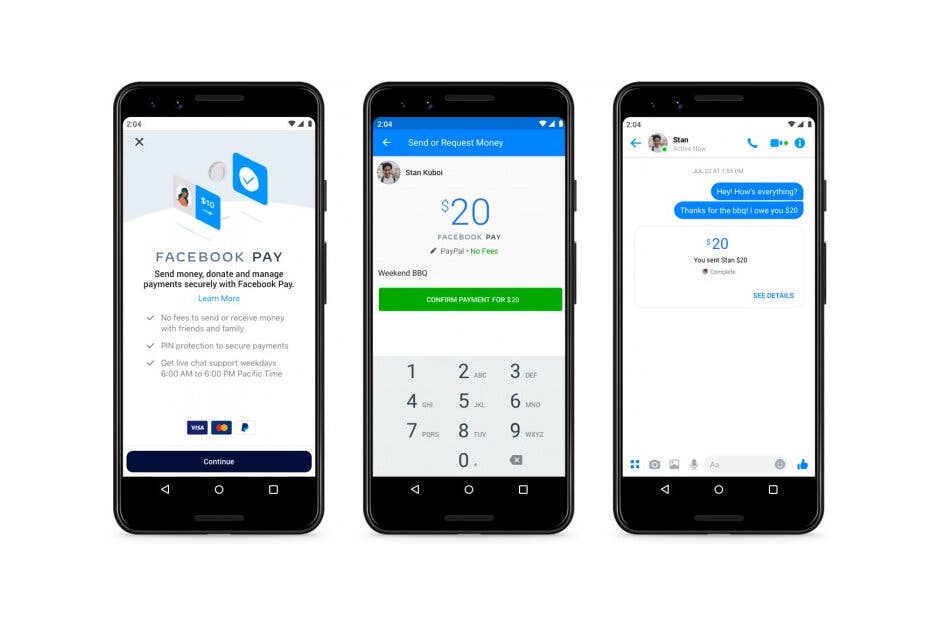 Likewise, every payment made through the service should be confirmed with facial recognition or fingerprint reader of your smartphone. It is also possible to add a PIN code to secure each transfer. Facebook promises to perform “anti-fraud monitoring of the systems to detect any unauthorized activity”. If an unusual payment is complete via Messenger, WhatsApp or Instagram, the social network will send you a notification. To elaborate its system of detection of fraud, Facebook relied notably on the expertise of Paypal.

Read Also:  Whatsapp: You will soon be able to transfer chats between Android and iOS

Aware of users’ concerns since the Cambridge Analytica scandal, Facebook says that it will not collect data from your purchase history to share with advertisers. Same story for your credit and debit card data. Attention, the firm reserves the right to use certain information collected via Facebook Pay to refine its own advertising targeting.

Given the many security flaws that have affected Facebook. Many Internet users may not be reassured that the social network manages such valuable data. The service could nevertheless appeal to users who are followers of the Marketplace. Facebook Pay will be available this week on Facebook and Messenger in the United States. In the coming months, the service will then reach WhatsApp and Instagram. For the moment, we don’t know any date of deployment in other countries.

Next Firefox Lite 2.0 for Android launched with new features