In the past, we’ve seen brand ambassadors endorsing specific Android OEMs like Samsung, Google tweet about the same brands using an iPhone. This has led to a lot of controversy. However, we now have a new addition to make to that list with Realme India CEO recently tweeting using an iPhone. This raises even more eyebrows because this is the brand’s CEO himself. Since Twitter mentions the device the tweet is tweeted from, it has caused nightmare to a number of brands notably Huawei, Samsung, Google, and many more recently.

On 16th November, Madhav Sheth, CEO of Realme India tweeted regarding the new update rollout for Realm 3 and Realme 3i. If you have been following him, you might be aware that he tweets such things from time to time to in order to engage with the audience. However, this particular tweet was no ordinary as it was tweeted from an iPhone. Now, this is the worst fiasco we have ever come across on Twitter considering it coming from the company’s top executive. We couldn’t find the tweet as it seems to have been deleted but there’s a screenshot of it below. 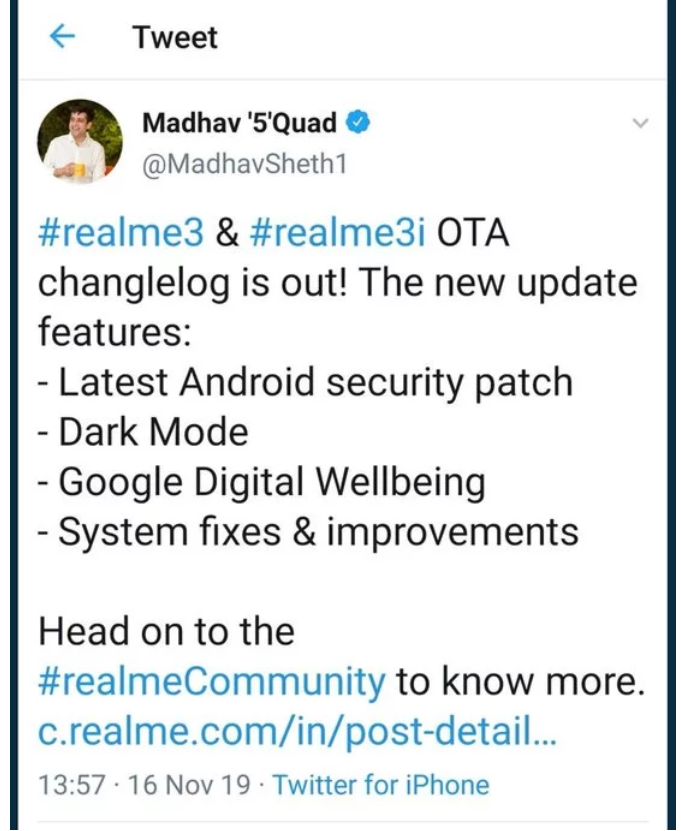 The previous blunders prior to this by other companies were due to brand ambassadors like Gal Gadot(Huawei) and Anushka Sharma(Google), as well as their official Twitter handles. After all, those profiles are maintained by a number of employees using different devices. We think that is the case with Madhav Sheth’s Twitter profile as well.

Anyways, we never know what is the truth as Huawei founder himself has said once that he buys Apple products for his family members and use it himself too. It is not an abomination to use competitors’ product, or is it? Let us know your thoughts in the comment section below.

Next Deal: Acer Chromebook 715 selling at a bargain price