Tomorrow is a great day for foldable smartphone enthusiasts, especially for those following Samsung’s innovative products. The South-Korean giant will be unveiling the Galaxy W20 5G that we’ve been talking a lot during the past weeks. Unlike previous rumors pointed, the Galaxy W20 5G isn’t Samsung’s new clamshell foldable smartphone. Instead, it can be considered a slightly tweaked version of the Galaxy Fold 5G. Today a new video teaser has popped out, showing the device in all its glory.

We know that the Galaxy W20 5G isn’t so exciting as it would be if it was the rumored clamshell smartphone. We are already familiar with the Galaxy Fold, and the new device doesn’t seem to come with any groundbreaking change. Apparently, Samsung will leave its next big thing in the foldable smartphone scene, for the next year. That said, the new video teaser showcases one of the most visible changes – A colored exterior with a White tone. 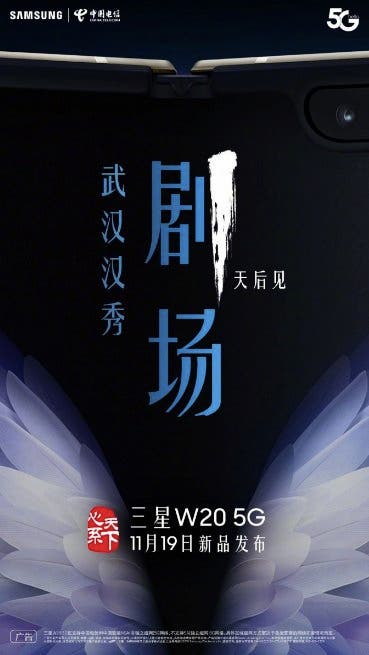 Interestingly enough, the very same Galaxy W20 White color appeared on the Chinese branch of the Samsung Members site (You can see it on the top of this post). There’s even a new teaser poster for Tomorrow’s event which teases W20 5G capabilities. In the end, the new smartphone is just a 5G variant of the original Galaxy Fold that will come for users that wish to test the country’s brand 5G network. Besides China Telecom, there are two other Telecoms with a 5G network established in the country.

Previous OxygenOS 10.0.2 brings October 2019 security patch and bugfixes for the OnePlus 7 and 7 Pro