Roberto Escobar, the brother of Pablo Escobar (one of the biggest drug dealers in history) has announced a foldable screen smartphone. This is not the first product from the Escobar Inc company that markets many products and services to enjoy the reputation of Pablo Escobar.

The smartphone is called Escobar Fold 1 and is actually a variant of the Royole FlexPai, but with some gold elements. And yet, it is cheaper, the original FlexPai cost about $1,300, and the Escobar Fold 1 will be sold at about $350 only.

Escobar Fold 1 comes running Android 9.0 and has an Octa-Core 2.8Ghz Qualcomm Snapdragon 8 CPU. With dual cameras at 16 and 20 megapixels, and a 7.8-inch AMOLED FHD+ screen when folded. The phone is capable of holding two SIM cards. And ships unlocked, so it can be used on your carrier of choice.

Roberto Escobar is also going to talk about himself by directly attacking Apple, as he said in the Digital Trends media :

“I have told many people that I would beat Apple and I will. I cut the networks and retailers, to sell to customers phones that can fold for only $349. Phones which in stores cost thousands of dollars by Samsung and others. This is my goal, to beat Apple, and by doing it myself like I always have,” Escobar told Digital Trends. 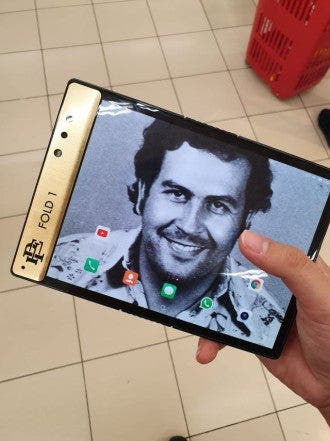 He also said he has plans to file a class-action lawsuit against Apple next year.

“They are scammers, and now we are preparing the class-action lawsuit,” Escobar said. “They are cheating the people and selling worthless phones to consumers, overpriced. My lawyers have been ready for long time. But before I sue them and give money back to the people which they deserve. I wanted to show them that my product is much better. On January 6 of next year, 2020, the $30 billion class-action lawsuit will be filed in the courts of California of America. We want Apple to give some of their illegal profits back to the people. I will make sure of it. I have spent almost $1 million just on lawyers to begin this lawsuit.”