With the end of the Galaxy S10 Android 10 beta program, Samsung is working hard to deliver the update for the Note 10 duo. Last week, the company rolled a fourth beta version for the Galaxy Note 10 duo.

Now, we have new information regarding the official release of the stable version for the Galaxy Note 10 & Note 10+. It will start to roll out before the end of this year. The community manager at Samsung’s official forum in South Korea has confirmed it. It is the same guy who has a record to announce the accurate dates of Android 10 beta updates. The fixed release date has not unveiled yet, but the other guy with the user name Galaxy3813 has mentioned that stable update would release before December 25. He is a brand ambassador at the Samsung Community forum & helping others in beta testing.

This means that the 4th beta will be the last one for the devices. The beta community manager has also confirmed that the Galaxy Fold is not going to get the beta version. Last week, the company has declared any Galaxy A series devices will not get the beta version, instead, they will get a stable version. 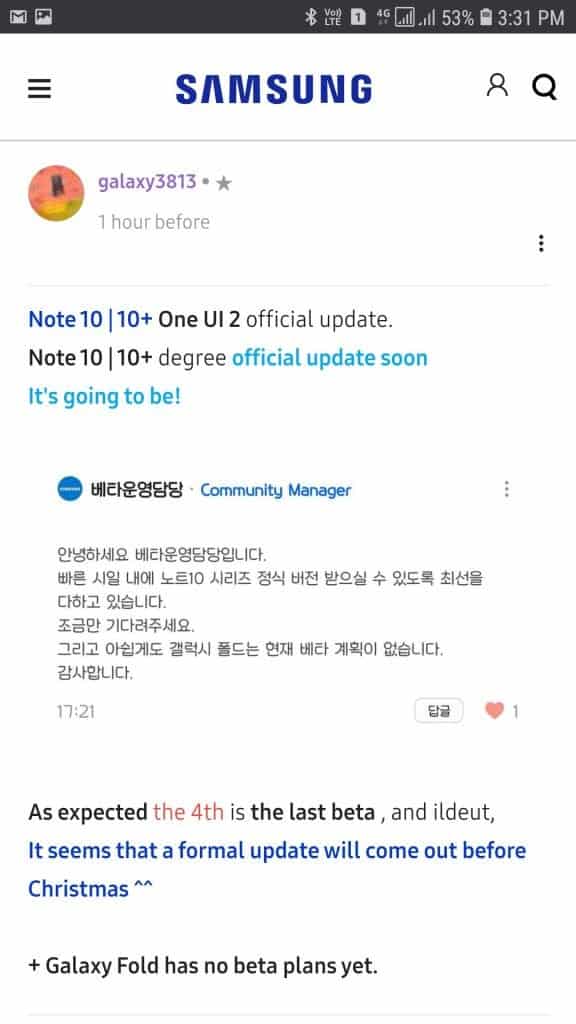 The last firmware version carries G97**XXU1ZSL4 and weighs around 540MB in size. The update comes to address a reboot issue while playing music. Those who were missing the lack of vibration when separating the S-Pen will be happy to know that this update comes to fix this. Last but not least is fixes the issue that made apps failing to run normally even after all permissions were granted.

At the end of last month, Samsung has released stable One UI 2.0 with Android 10 version for Galaxy S10 series smartphones. It rolled out for both beta & non-beta users. The latest update has now spread in all the major countries. Now it is time for Galaxy Note 10 & Note 10+ users to taste the new One UI 2.0 with Android 10 update. We will inform you when the company reveals the official release date.
Source/VIA :
TizenHelp

Previous Huawei to Enter the Windows 10 on ARM Ecosystem?

Next Galaxy S10 Lite and Galaxy Note 10 Lite: here are the prices