WhatsApp has changed the way we communicate with each other. Nowadays, it would be very complicated to carry out the daily activities of our life without the messaging applications. Groups of friends, work chats, favorite contacts …

On this occasion, we want to talk about one of the novelties that a lot of users had been asking for in the last months. Yes, call waiting is already a reality with the latest WhatsApp update for Android. From now on we can put on hold the calls we receive through the app. Although this system has some limitations. We tell you all the details below.

WhatsApp includes “call waiting” in its own way 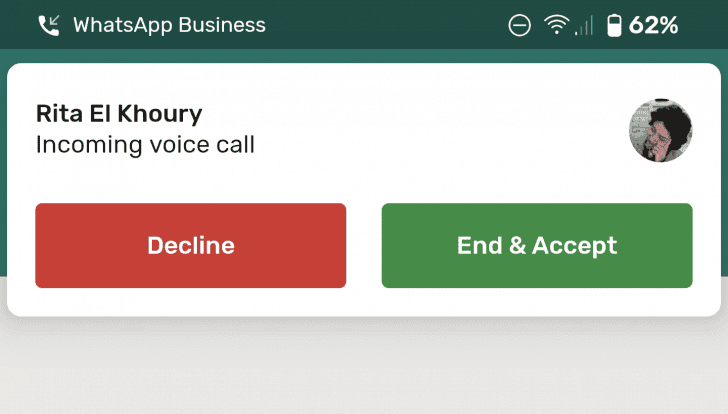 WhatsApp calls are a very useful feature. From the messaging app, you can call any of the contacts for free with the mere fact of pressing a button. Everything works through the Internet, so phone carriers have nothing to do with these types of procedures. However, if someone called us at the same time we made a call. We could not find out until we hung up.

With the latest version for Android (v2.19.352) everything changes since WhatsApp have decided to include calls on hold. From now on, when someone calls us while we are making a call, the notification appears in real-time. A system similar to the one we can see in traditional calls that has two options: Reject or End and accept.

As can be seen in the screenshots, this system does not perform the functions that we all know as “call waiting”. It is clear that you cannot pause a call to carry out the next one and then return to the previous call. But at least we can know at the moment if the incoming call is more important than the one we are making.