Every year, the performance of smartphones is becoming higher, which, however, is not surprising. Chip makers try to ensure that power growth is constantly observed, and it is of high quality.

This year, the mid-range chip segment was replenished with such innovations as Exynos 980, Kirin 810 and Snapdragon 765G. But which of the solutions outperforms the competition and is the best in performance?

The answer to this question is given by the AnTuTu benchmark, through which we managed to drive out all three smartphones with the new chips. So, the prototype Vivo X30 and Oppo Reno 3 Pro, as well as Huawei Nova 5i Pro took part in the test. All three have 8 GB of RAM and a flash drive with a capacity of 128 GB. 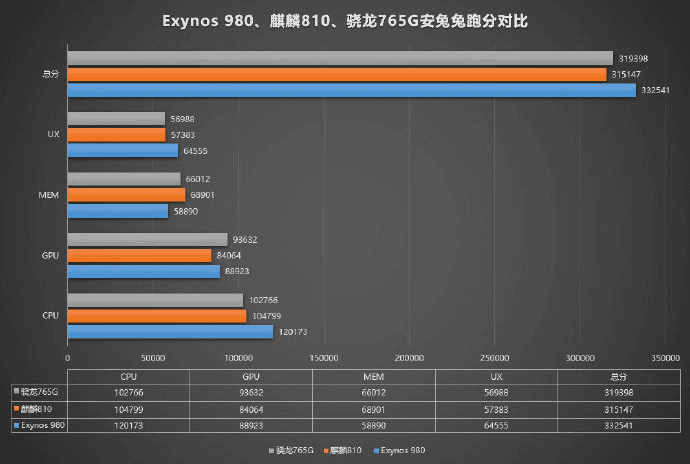 Surprisingly, the leader in the overall standings was Exynos 980 with a score of 332541 points. Then we have the Kirin 810 and in third place was the Snapdragon 765G.

Where the Qualcomm SoC was able to show its superiority is the performance of the graphics chip – 93632 points versus 88923 and 84064 for Exynos 980 and Kirin 810, respectively. This once again confirms that Adreno video accelerators have no equal in the Android world.

People with technical knowledge will be disappointed to see Qualcomm still using Cortex-A76 based CPU cores on SD765 and SD765G. In comparison, the mid-range Exynos 980 from Samsung comes with Cortex-A77 cores.

For graphics, the SD765G come with Adreno GPU that promises 38 percent improved performance than the predecessor Adreno 618 GPU that came with Snapdragon 730 last year. The SD765 offers 20 percent better GPU performance than SD730.

Tell us what you think of this comparison in the comments below.

Previous Android now has an APP with "shortcut" function like iOS