Finnish manufacturer, HMD Global, has since turned the fortunes of the Nokia brand. Since its take over, Nokia is now competing in the market again. Back in the day, Nokia was known for its dogged feature phones which stands the test of time. However, in the era of smartphones, many manufacturers give little or no time to feature phones. This also means that we can barely find a new tough feature phone in the market. Yesterday, Nokia mobile official Weibo released a poster of the Nokia 800 Tough and suggests that this device will arrive in China today. However, it turns out that the company only announced the released date for this phone. The Nokia 800 Tough will arrive in China on December 24th. 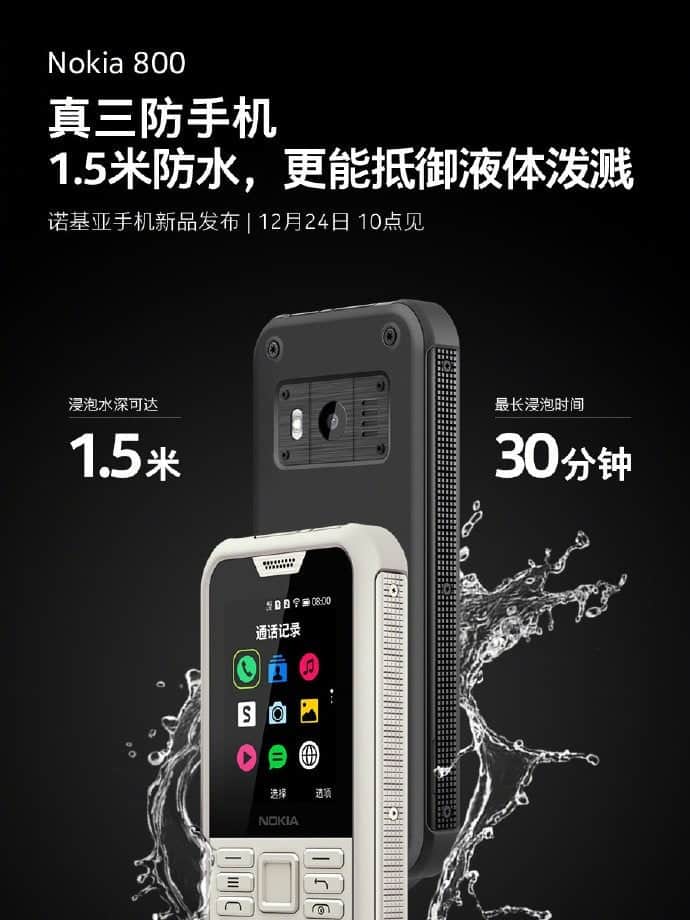 As the name implies, this phone comes with waterproof, dust-proof and drop-proof. In September this year, Nokia released a three-proof mobile phone. This phone comes with IP68 waterproof and dustproof and military-grade standards. This 2.4-inch display phone has two colors – desert and black. The size of the phone is 145.4 x 62.1 x 16.11mm and it weighs 161g. The biggest selling point of this phone is its ruggedness. In addition to its MIL-STD-810G standard and IP68 level water resistance, it the 1.8-meter drop test. According to the company, the water immersion depth can reach 1.5 meters and the longest immersion time is 30 minutes.

This phone meets focuses on durability. In terms of performance, the operating system is KaiOS and it uses a Qualcomm 205 SoC. It also uses 512MB of RAM and 4GB of internal storage. The built-in 2100 mAh large battery has a super long battery life. It also uses a 2MP camera. In terms of network, the Nokia 800 Tough supports 4G, Wi-Fi and GPS. In Europe, this phone costs 109 euros ($121). What do you think about this military-grade phone from Nokia? Let us know your thoughts in the comment.