Recent rumors indicate that Samsung is working on the successor of the Galaxy M30. Apparently, the Galaxy M31, code-named SM-M315, may go on sale in the first months of 2020. In addition to the approximate release date. We learned some key characteristics of the smartphone thanks to its passage through Geekbench.

According to new information, Samsung SM-M315F will run on the Exynos 9611 proprietary chipset, which has a base frequency of 1.74 GHz. It was also indicated in the database that 6 GB of RAM will be installed in the smartphone. And the firmware will be One UI 2.0 based on Android 10. In the single-core test, the device scored 348 points, and 1214 in the multi-core test.

The key features of the Samsung Galaxy M31 appeared on Geekbench 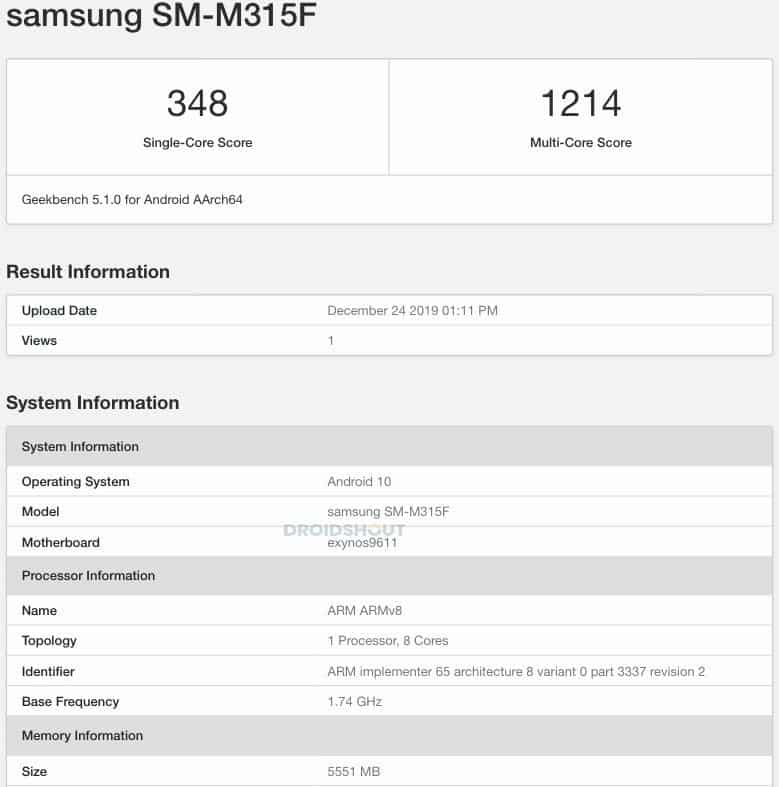 The Galaxy M30 has proved to be a very tenacious device with a large battery with a capacity of 6000 mAh and an economical processor. Most likely, the South Korean company will retain this amount of battery in the Galaxy M31. Additionally, it is expected that Samsung will install a built-in main camera with a 48 MP main lens on the M31.

The rest of the specifications of the Samsung Galaxy M31 are still unknown. But we can expect to hear more about the device in the coming days as the launch date approaches. That said, we can expect them to be more powerful than their predecessors, at the very least. Samsung appears to be capitalizing on the response the current Galaxy A and the Galaxy M series of smartphones has received this year. As it has already started launching the Samsung Galaxy A 2020 series of smartphones.