Xiaomi Mi 10 is the future high-end smartphone that the Chinese manufacturer will probably present at the next Mobile World Congress 2020 in Barcelona. It may be accompanied by the Mi 10 Pro. For the moment, Lei Jun’s company has confirmed the existence of the main model that will adopt the Snapdragon 865 SoC, announced a few weeks ago by Qualcomm, together with the 5G modem. As usual, the rumors begin to spread by providing technical information on the two smartphones.

A well-known Chinese leaker has revealed that Mi 10 and Mi 10 Pro will differ in the characteristics of the display, camera, fast charging technology, amount of memory and battery capacity. In short, they will have many differences. In the past few hours, however, the alleged technical data sheets of future Xiaomi devices have been published on Weibo.

According to the source, the Xiaomi Mi 10 would have a 6.5-inch OLED display with a 90Hz refresh rate and four rear cameras. The main sensor mentioned is the Sony IMX686 of 64MP which would be combined with a 20MP wide angle, a 12MP telephoto lens and a last 5MP (macro or depth of field). Apparently, the smartphone can count on a 30X digital zoom.

The battery would be greater than 4,500 mAh with support for 40W fast charging via cable, 30W wireless charging and presumably with 10W reverse charging. As for the possible memory configurations, we could have 8 or 12GBof RAM and 128 or 256GB of internal memory. 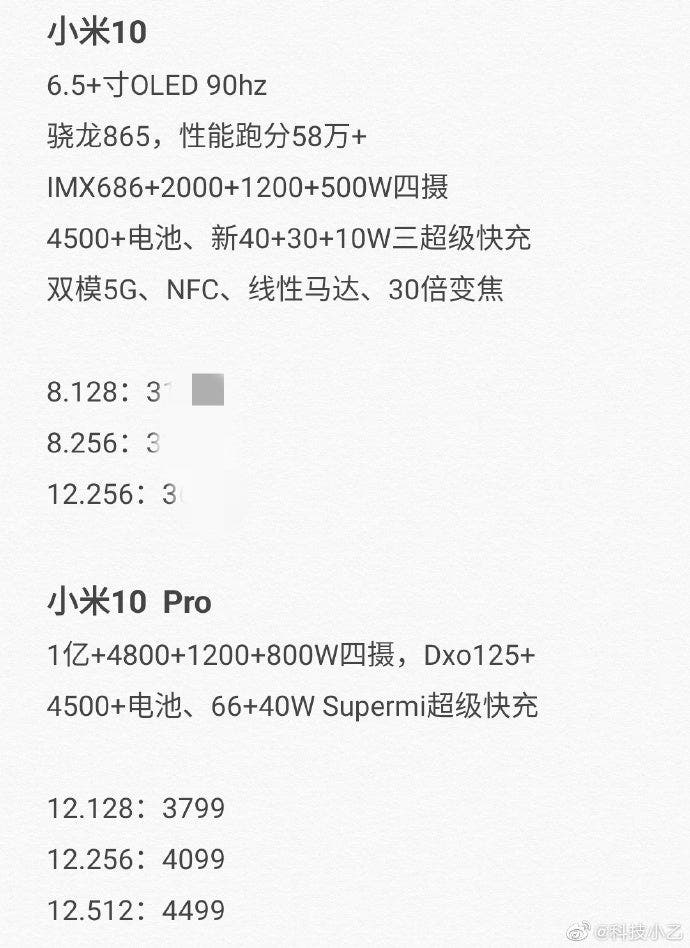 There is less information about Mi 10 Pro. Here, the main sensor should be the 108MP sensor (seen on Mi Mix Alpha and Mi Note 10). Assisted by another 48MP, one 12MP and a quarter 8MP. Fast charging should be 66W and wireless 40W. The Pro variant should only be able to count on 12GB of RAM with internal memory that should reach 512GB.

The top model would have a sale price of 4499 yuan (about $646). Figures that reflect the philosophy of the high quality/price ratio carried out by Xiaomi. However, there is still some time left for the official presentation and what is reported is not official. For this, it is good to take any information with caution.