In the second half of last year, Russia passed a weird decree which requires electronic products, including phones, tablets, computers, smart TV boxes, etc., to pre-install local apps (Russian apps). This is a major requirement if the company hopes to get a sale license. Recently, relevant Russian authorities have released more information about this decree.

Smartphones in Russia must pre-install Yandex

A new requirement says that all electronic devices sold in Russia must be pre-install “Yandex”. This app is a browser from a Russian company. However, the Association of Home Appliances and Computer Equipment Manufacturers (RATEK) said that the Russian law “may be harmful to the market” and “this will hit consumers, electronics manufacturers and software developers”. It may hurt certain manufacturers because some of these operating systems are not suitable for external applications. The system that will pre-install local applications will even have to pay a license fee.

Yandex is one of Russia’s important online service portals. Its current services include search, latest news, maps and encyclopedias, e-mail, e-commerce, internet advertising, and other services. According to data from monitoring agency, StatCounter, as of December 2019, Yandex’s search engine market share in Russia is 44.3%. This is slightly lower than Google’s 52.32%. 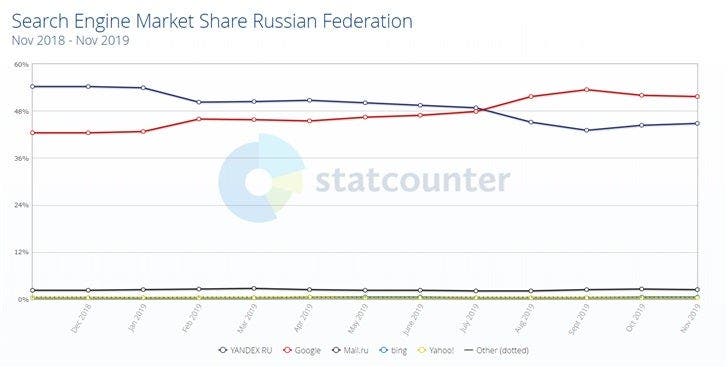 Long before this decree, Russia has other policies to restrict foreign Internet companies. The Russian Federal Communications Regulatory Authority (Roskomnadzor) requires that domestic and foreign companies must store the personal data of all Russian users in the country starting from September 2015. LinkedIn had objections with the department and it was banned after a court decision.

At present, Apple, Google, Samsung, and Dell have gathered to discuss how to deal with the decree. This new law will take effect on July 1, 2020. However, this meeting seem to have little or no effect. According to StatCounter’s data, as of December 2019, the top three vendors in the Russian mobile phone market are Samsung, Apple, and Huawei, with market shares of 24.68%, 21.48%, and 17.88%, respectively.