A few hours ago, the President of the US, Donald Trump, blasted American manufacturer, Apple Inc. According to the president, it has helped Apple on trade and many other issues, but Apple has refused to unlock the phones of criminals.

We are helping Apple all of the time on TRADE and so many other issues, and yet they refuse to unlock phones used by killers, drug dealers and other violent criminal elements. They will have to step up to the plate and help our great Country, NOW! MAKE AMERICA GREAT AGAIN.

Trump’s tweet follows the conflict between Apple and the FBI. Mr. Donald Trump believes that Apple should cooperate with the FBI’s investigation. The dispute between Apple and the FBI is whether Apple has provided appropriate assistance to allow the FBI to unlock the iPhone of the suspect in the Pensacola Naval Base shooting in Florida. The FBI cannot open the iPhone because it has a password.

Trump’s tweet is coming after the US Attorney General, William Barr, had expressed dissatisfaction with Apple. Barr said on Monday that Apple did not provide “substantial help” to unlock the suspect’s two iPhones. According to Apple, it has given the law enforcement gigabytes of information related to the Pensacola shootings, However, it would not set up “backdoors” or dedicated software for law enforcement to access. 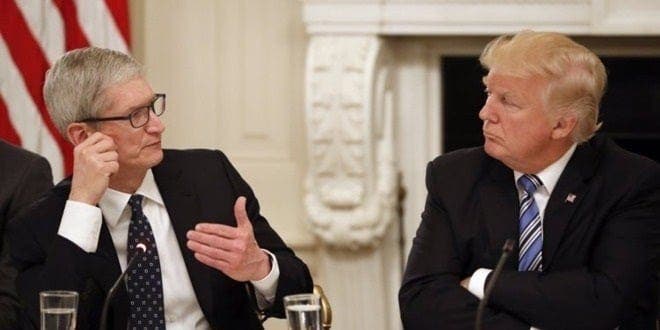 In recent years, Apple CEO, Tim Cook, has been cultivating friendly relations with Trump. This is to influence him and protect Apple from the impact of tariffs.

This is the second time Apple has been involved in a dispute with the FBI regarding unlocking an iPhone. In 2016, the U.S. Department of Justice brought Apple to court asking Apple to help unlock the iPhone of Syed Farook, a San Bernardino shooter in California. The shooting killed 14 people. In the end, the FBI found an unidentified private company that cracked the iPhone’s security system.

At the time, Trump was running for president. “I fully support the court’s decision. In this case, we should turn on the iPhone,” he said.

Latest dispute between Apple and the FBI

January 8: The FBI stated that it had asked Apple to assist in obtaining data on the two iPhones. The two phones belonged to Mohammed Saeed Alshamrani. He is the gunman who made the shooting at the Pensacola Naval Base in Florida last month. He is dead. Apple said at the time that when the FBI requested it last month, the company had provided the FBI with all the shooting-related data they had.

January 14: US Attorney General Barr said that Apple has been asked to provide assistance, but Apple has not given any substantial help so far.

January 14: Apple later argued that the company had answered all inquiries from law enforcement officials and handed over all the information the company could get. Apple said the company received its first inquiry on January 6 but didn’t receive a notification about the second iPhone until January 8. Apple also disclosed that the company’s engineering team has recently held a conference call to provide additional technical assistance to the FBI.

Next Apple iPad Pro 5G will use millimeter wave technology