At the CES 2020, Samsung released a number of new TV products, including the flagship Q950TS QLED 8K borderless TV, the new size micro LED TV ‘The Wall’, etc. They all come with powerful display technology. In addition, in fact, Samsung originally wanted to show a completely wireless TV but failed to show it due to various reasons.

Han Jong-hee, President of Samsung Optical Display Division, revealed that this wireless TV developed by Samsung not only lacks a conventional video input cable but also comes with no power cable.

At the same time, Han also pointed out that the farthest current wireless power transmission is only about 2 meters. Based on the actual situation of the exhibition site, the TV is likely to fail to light up. For all these reasons, Samsung finally gave up the display of this wireless TV.

According to previous patent documents, Samsung wireless TVs are built in accordance with the principle of electromagnetic induction. There must be no obstruction in the sensing range. Some technical difficulties have not been completely overcome. However, it seems that Samsung has achieved a level of production of wireless TVs. As for distance, currently, its related technical staff is continuing to tackle the problem. So most likely, we will be able to take a look at it at CES2021.

When Did The Wireless TV Products Begin Emerging?

It is worth mentioning that, as early as 10 years ago at the CES2010 show, the first ‘Wireless TV’ appeared. The well-known brand Haier exhibited the world’s first ‘tailless TV’ at that time and realized the wireless transmission of 1080p signals through WHDI wireless video transmission technology. The principle of ‘non-radiative magnetic coupling resonance’ also realized long-range high-efficiency wireless power transmission. Although the product was wireless, because the technology was not mature enough and the cost was relatively high at that time, it could only be considered a concept product. 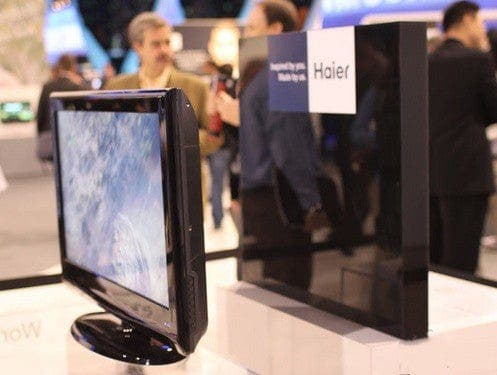 Whether it is a TV computer or a smartphone headset, wireless has always been one of the important directions for the development of various devices. For example, the true wireless headset that was very popular last year has received high attention and recognition from consumers. The wireless charging that has been continuously improving in the past two years has great market demand. So we have reasons to believe that the future is wireless era.