The Redmi K30 was introduced last December and it seems that we will be getting a high-end Pro version soon. The upcoming Redmi K30 Pro has just passed the well-known Geekbench platform.

It is curious to note that there was practically no mention of the K30 Pro in a long time. However, now that the news regarding the Pocofone F2 has started to be more frequent, here’s the reminder that Xiaomi’s other sub-brands are not “dead”.

This passage does not only proves the existence of this device, but confirms the presence of the Snapdragon 865 processor. In addition, the Redmi K30 Pro will feature 8GB of RAM and will come with Android 10 by default.

It will be considerably more powerful than its predecessor

Looking at the results obtained by the Redmi K30 Pro in this performance test. We see a clear increase compared to the Redmi K20 Pro. This is due to the presence of the new Qualcomm Snapdragon 865 processor, which has proven to be far superior to its predecessor. 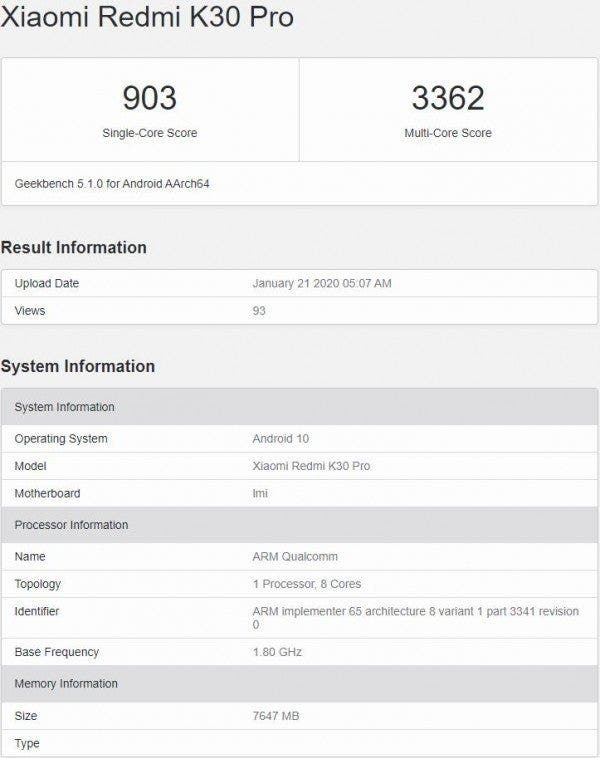 It is important to note that this will be the same processor included in the Xiaomi Mi 10, Samsung Galaxy S20 and other great flagships of the Android market. However, the selling price of the K30 Pro should be lower than the models mentioned.

This happened with the Redmi K20 and K20 Pro, so we expect the same to happen this year. Redmi will simply take the K30 and equip it with superior hardware.

Indeed, the K30 Pro will feature a “hole in the screen” in the upper right corner for its front camera. In addition, it will arrive with reduced margins. At the rear, the camera will have a vertical alignment and will be embedded in a round module.

It is not known when this K30 Pro will be officially unveiled. With the Xiaomi Mi 10 revelation approaching, Redmi is not expected to reveal its top of the range in the coming weeks.

Next Huawei founder says the company will survive without the U.S.